Justice Department Says Domestic Abuse Is Not Grounds For Asylum 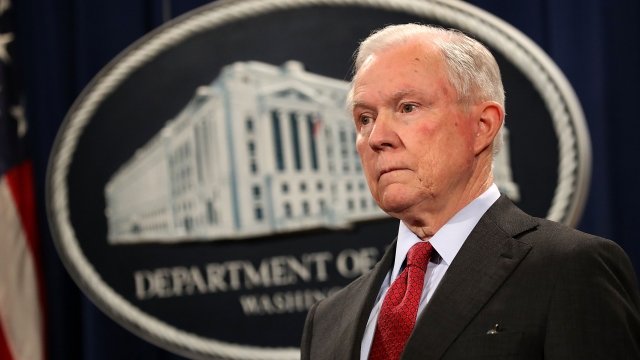 Attorney General Jeff Sessions is tightening the reigns on granting asylum. He issued an order Monday saying domestic violence alone isn't reason enough for the U.S. to grant protection. And that could have major implications.

"Asylum was never meant to alleviate all problems, even all serious problems, that people face every day all over the world," Sessions said Monday.

Sessions' decision was rooted in a case from 2014 in which a woman from El Salvador claimed her husband physically and sexually abused her. Initially, an immigration court turned down her request for asylum, but in 2016 the Obama Justice Department intervened and said the woman could stay.

In order to do that, the Obama administration had to find that the woman was part of a "particular social group" under persecution. The Justice Department said she was a member of a group of “El Salvadoran women who are unable to leave their domestic relationships where they have children in common" with a partner.

This Queer Dreamer And 'Chicagoan Of The Year' Was Granted Asylum

Years after she got herself arrested at the border as a form of protest, this immigrant was granted asylum, but the government could appeal.

But the law also says a person claiming asylum has to be credible and has to show that their membership in a particular group is the reason they're being persecuted. Sessions says the woman in this case didn't do that, and he says the social group she claimed to be a part of didn't qualify.

The Justice Department under President Barack Obama decided the woman from El Salvador should get to stay, in part, because of a previous case in which a Guatemalan woman was granted asylum as part of a very similar social group.

On Monday, Sessions said that case was wrongly decided, and he voided the subsequent ruling on the El Salvadoran woman's case.

The decision lays the groundwork for future asylum denials for people claiming they fear domestic violence. That doesn't mean that's what will happen, but this is the Department of Justice telling immigration judges where it stands, and that carries considerable weight.