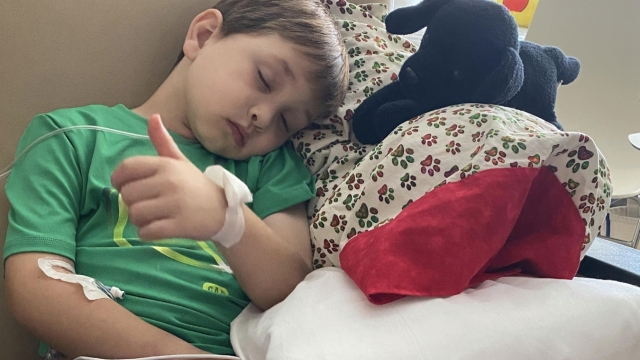 SMS
Serious Illness Linked To COVID Impacts Children
By Haley Bull
By Haley Bull
September 6, 2021
The CDC reports 4,661 cases over the course of the pandemic and 41 deaths.
SHOW TRANSCRIPT

Doctors are keeping an eye out for cases of a rare but serious illness linked to COVID-19.

It’s called multi-inflammatory syndrome in children. The CDC says different parts of the body, including some organs, can become inflamed, with many children having had the virus causing COVID-19 or exposed to someone with COVID-19.

Erich Lipphardt said COVID was brought into their home in April. But in June, his son Max, 6, started feeling ill after his 6th birthday.

“Looking back at some pictures, now everything’s a lot more clear,” said Lipphardt. “We didn’t realize what was going on but at the pool I’m looking at some pictures I can see his red eyes and he was getting pretty tired.”

Lipphardt said as they watched him develop a sore throat, fever and no improvement, they knew something was wrong. They wondered about MIS-C, but weren’t sure. Eventually they took him to the hospital.

“He walked into the ER the children’s ER around 4:30 pm pretty sick, and then that night he just really tanked,” he said.

Doctors in South Carolina ruled out other conditions and determined Max had MIS-C. He spent six days in an intensive care unit.

“We feel like the prognosis for the future is good. The challenge is this is so new for anybody. Nobody really knows what the long term impacts of this might be,” said Lipphardt.

The CDC reports 4,661 cases over the course of the pandemic and 41 deaths.

“MIS-C is a very rare compilation for the number of kids who indeed develop COVID19 and will usually manifest with ongoing fevers, rashes, red eyes, gastrointestinal symptoms, diarrhea and vomiting which will be really evident,” said Dr. Federico Laham.

“Almost all of them have a favorable outcome and they make it home after several days but many times they are very sick, they can be in the intensive care unit,” Dr. Laham said.

He said the best tool is prevention.

“If we build on our own experience here in Orlando from the last year and from the other two meaningful waves that we have, if we learn from the experience from other parts of the world it’s pretty much like a mathematical model,” Dr. Laham said. “You have a peak and then four weeks later you start seeing these cases coming and knocking on the door.”

Some hospitals are watching for any increases in MIS-C in the next few weeks with recent surges in COVID19 cases.

A spokesperson for Wolfson Children’s Hospital in Jacksonville said they’ve treated more than 60 children with this syndrome since the start of the pandemic. “With school recently starting and the current surge of COVID cases in Northeast Florida, we expect there may be a surge of MIS-C cases in the next few weeks,” the spokesperson stated.

The condition is one researchers are working to learn more about. The cause is not yet known.

“Every little bit of knowledge we can add to the pool of what is known about this disease can help come up with potential biomarkers, understanding of what’s going on and hopefully cures,” said Noam Beckmann, Ph.D.

Beckmann is an assistant professor of genetic and genomic sciences at the Ichan School of Medicine at Mount Sinai. He was the lead researcher on a recent study that may have found a potential clue in the infection fighting cells of the immune system after sequencing samples from a COVID-19 biobank.

“You end up in a situation where you have these cells of the immune system that are responsible for killing all the cells that are infected that stayed active when they’re supposed to shut off and that led, that’s what we identified as one of the cause of this devastating disorder,” said Beckmann.

With questions still, some impacted families are staying on top of studies.

“It was extremely traumatic to go from a birthday party that was where we were Saturday to being as sick as he was,” said Patti Burkett.

Burkett said her son, Brady, 7, had MIS-C weeks after COVID hit their family in Florida last year. She said he had a fever, was disoriented and had neck pain.

“You’re asking questions about your child’s health and they’re telling you we have no clue. Nobody wants that,” Burkett said. “It’s your worst nightmare for your child I don’t know why people risk it. “

Brady is nearly a year out of the hospital now and doing better.

Meanwhile, Kasen Buchanan is just a few weeks removed after a stay in a PICU in Arkansas.

“It needs to be advocated for more because it’s very serious it’s so that’s something that we just really want to share with people so they don’t have to go through this,” said Heather Buchanan.

She said COVID hit their family in June, sending her husband to the hospital, but leaving the kids without symptoms. Weeks later, she said Kasen started feeling ill with a high fever, headache, neck pain, no energy, red eyes and GI symptoms. She said an emergency room and family doctor initially didn’t land on MIS-C. However, a children’s hospital did and flew him there. He spent a few days in the PICU before his release.

Now Buchanan, like others, wants to make sure other parents are aware, too.

“Even if their kids don’t go through this, they need to know what to look for. I had no idea. I just thought it was a really bad virus. But my mom heart and my intuition is going, no my kid doesn’t get like this when it’s a virus,” said Buchanan.

“If you have children you need to understand there is a terrible tentacle of COVID,” said Lipphardt.

As for Max, “Today he is back to his knuckle-headed, pretty awesome self,” said Lipphardt.