Serbian Reporter Seems Unfazed When Someone Flashes A Gun On Camera 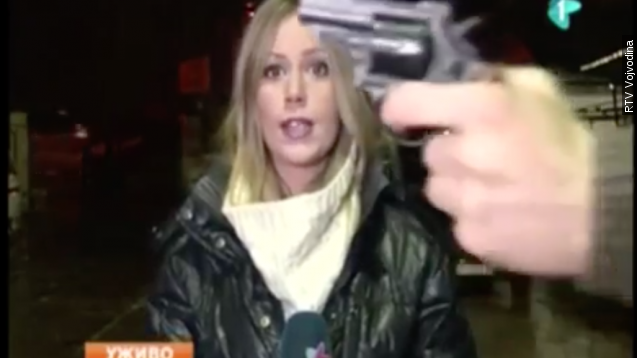 A Serbian reporter completely kept her cool when a man flashed a gun on-screen during a live report.

You could see her shake her head and seemingly wave the man away before continuing her report.

According to Sky News, Serbian public broadcaster Tamara Bojic and her crew from RTV Vojvodina were reportedly later threatened, but the person eventually ran away. No one was injured.

The Serbian interior minister said the incident is being investigated and it's not clear whether the gun was real. He also called the whole thing "intolerable."

Multiple outlets brought up the WDBJ incident from nearly six months ago when two U.S. journalists were shot and killed on live TV.

The person who flashed this gun has not been identified or caught.