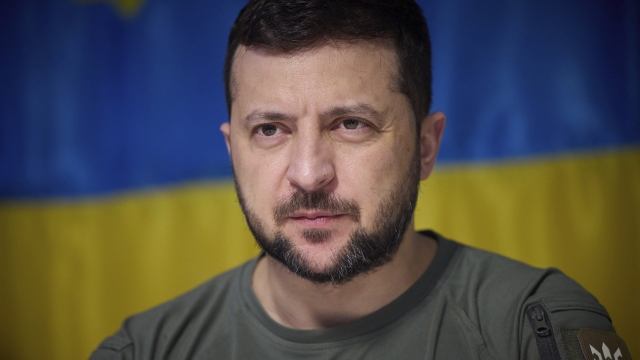 As the senior adviser to Ukrainian President Volodymyr Zelenskyy,  it was crucial he be in the room for a phone call with then U.S. President Donald Trump.

"After that phone call, we realized that we had our work cut out for us," Novikov said.

He says what should have been a conversation about a visit to the White House took a strange turn.

"Obviously, as a new president, (Zelenskyy) was expecting to go to the White House, to go to D.C., and start that relationship with the United States who's our main ally and partner and, you know, there are a few misunderstandings there," he said. "But you know, by that time, we're reading between the lines and reading what, really, Rudy (Giuliani) and President Trump were after quite well, so obviously, there was some surprise President Trump was so explicit in his messaging."

That messaging pressured an investigation into former Vice President Joe Biden and his son, Hunter.

President Trump's personal attorney Rudy Giuliani had been pushing Zelenskyy's aides on this topic for a while, starting almost immediately after Zelenskyy was elected.

The goal was to convince Zelenskyy to announce a probe into a Ukrainian gas company associated with Hunter Biden.

Giuliani also pushed for Zelenskyy to investigate baseless claims that Ukraine, not Russia, interfered in the 2016 elections.

It's known as the now infamous quid pro quo campaign.

"I mean, we chose the strategy of playing dumb and stalling as much as we can. So our objective was to not get involved, and President Zelenskyy was explicit about that. He told me early on that our policy is to do whatever we can to not get involved in U.S. domestic policy,"Novikov said.

Trump responded quote: "I would like you to do us a favor though."

He then asked Zelenskyy to look into the election conspiracy theory, as well as Biden's son.

"So, yeah, we jumped through a lot of hoops, and once that kind of conversation concluded, obviously nobody expected that it was going to be public knowledge. There's going to be an impeachment or transcript or anything, so we were somewhat relieved that we actually had ice cream once we hung up the phone," he said.

It was a sweet celebration for Zelenskyy and his team — but it didn't last long.

Shortly after the call ended President Trump ordered the office of management and budget to withhold nearly $400 million in military assistance funds meant to help Ukraine defend against Russia.

As for the White House invitation, Zelenskyy never got one until Joe Biden became president.

But for President Trump, the call marked the beginning of a long road that ultimately led to his first impeachment trial.

"Impeachment was a bit of a surprise. But to be honest, once I kind of heard the tone and the messaging on that call, I kind of made it was well for either the U.S. Ukraine relationship or for the, for the administration in the White House at the time because like, look, it was unheard of it was uncalled for and you know, it was threatening to both countries," Novikov said.