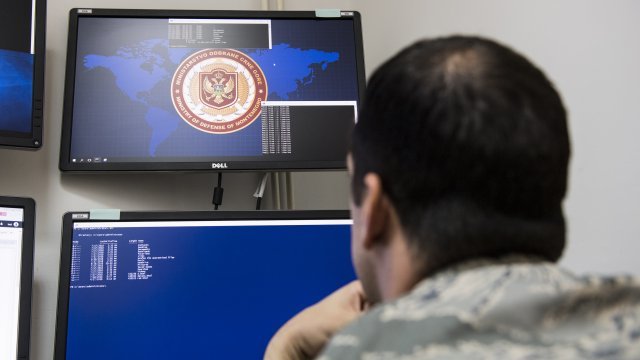 Cybersecurity is quickly becoming a bipartisan issue for Congress with lawmakers in both parties putting forward ideas that could ramp up the federal government's response to cyber threats.

Senator Mark Warner, who's the Vice-Chairman of the Senate Select Committee on Intelligence, says there needs to be a 'cyber doctrine' or rules of the road for the internet, to setup security and international behavior standards without putting up barriers for innovation.

"For a long time we could do this with very little restrainer or rules or regulations but we've seen both foreign actors and in some cases the social media companies be so irresponsible about trying to put up any guardrails," Warner said.  'Now we have to try to put up at least some guardrails going in place."

According to a White House report released this year, an overwhelming majority of government agencies are in dire need of cybersecurity policy improvements. After major hacks of U.S. government and businesses, warner says this is one of his top concerns.

"Countries like China and Russia would spend much less than us on defense but much more on a percentage basis on cyber and misinformation and disinformation," Warner added. '[That] really means that we may be vulnerable here in 2018 [and] 2019."

Over on the House side there's a recently passed bill that will empower the people who handle the federal government's tech infrastructure. This includes elevating the role of Chief Information Officers or CIOs.

"We think it's really important that the CIO reports up to the secretary or the department head and that they have that authority and really that they be the person that the buck stops with," Kelly said.

Kelly says she worked closely with her Republican colleague Representative Will Hurd. Hurd has called cybersecurity "one of the few remaining bipartisan issues."

Addressing the tech leadership structure in government is one thing but the workforce shortage of experts is yet another problem. One approach the Pentagon is using is to hire white hat hackers to detect vulnerabilities.

"The two big problems that the federal government [has] when it comes to cybersecurity is the same as corporate and private industry," Ellis said. "It's the fact that they're up against an army of adversaries and trying to defend this like very big attack surface where there's lots of possibilities for things to go wrong."

Political leaders say the government would likely take a multifaceted approach to handle cybersecurity issues and they will make it a high priority during the 116th Congress.