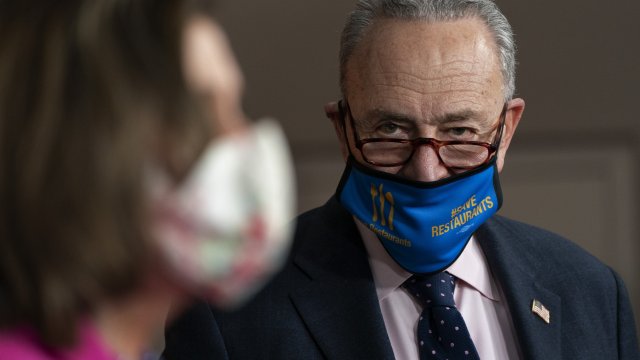 One of the most expensive bills in American history — inching closer to passage in Congress. Debate and a vote, stalled in the Senate, after Republican Sen. Ron Johnson demanded all 600 pages of the bill to be read aloud.

The nearly $2 trillion Senate package will not include a higher minimum wage and will limit who can receive that $1,400 check. Now, single Americans earning $75,000 or less will receive the full amount and it will taper off up to $80,000. The cutoff for couples filing jointly is $160,000, with the full amount only going to couples earning less than $150,000.

The new restrictions are to appease some of the more moderate Democrats and maybe even get some Republicans on board.

Both sides have concerns about pieces of the bill seemingly unrelated to COVID, like $1 billion for funding a farm equity commission and legal center for minority farmers, or school funding that won't actually be used for years. Many Republicans are opposed to sending taxpayer money to some states and cities that don't appear to be struggling.

And now, a new battle: President Biden is drawing criticism from some of America's smallest business owners. His administration promised that even companies with one employee could get new loans. According to Politico, that won't happen. It reports the Small Business Administration won't take applications from many of those who have already received a loan. Biden is insisting the bill needs to be passed.