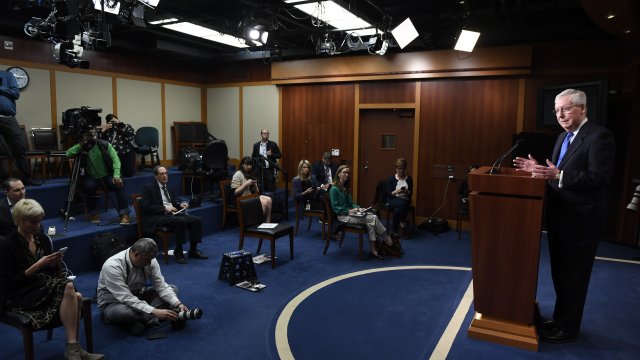 Senate Majority Leader Mitch McConnell says the Senate will stay in session as long as it takes. McConnell is telling his fellow Republicans to support the recently passed House coronavirus relief bill without making any changes.

"My counsel to them is to gag and vote for it anyway, even if they think it has some shortcomings," McConnell said.

He is already turning his focus to the dramatic economic stimulus package proposed at the White House Tuesday morning.

The money would go to small businesses, the travel industry and a payroll tax holiday — something the president has been pushing from the get-go.

Democrats have their own plan that looks like it will cost around $750 billion. Senate Minority Leader Chuck Schumer says the vast majority of aid should go to workers.

He is also asking that the federal government and banks hold back on foreclosures and grant relief for student loans.

Minority Whip Sen. Dick Durbin also proposed changing Senate rules to allow members to vote remotely. Right now, a senator has to be present in order to have their vote count.

The majority leader quickly nixed the idea, saying in part: "It's not set in stone that a roll call vote has to be 15 minutes. We can have people come in small groups or one at a time. We can handle social distancing without changing the rules."