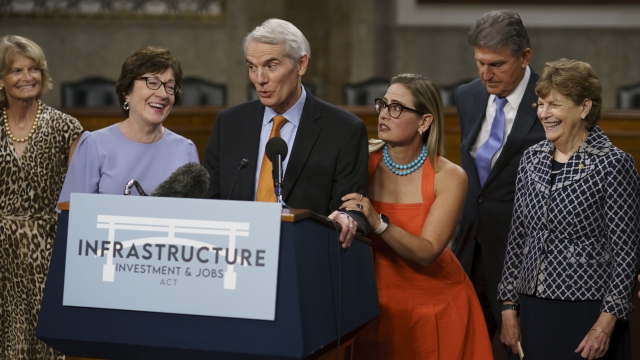 SMS
Senate Takes Up $1 Trillion Infrastructure Deal
By Eliana Moreno
By Eliana Moreno
July 29, 2021
Senators from both sides of the aisle were able to agree on some key provisions of the package.
SHOW TRANSCRIPT

We're seeing some forward movement in the push to pass the $1 trillion infrastructure plan that we've been talking about for what feels like forever.

The Senate voted last night to begin work on the plan after weeks of back and forth over the bipartisan deal.

And senators from both sides of the aisle were able to agree on some key provisions of the package.

It's still unclear if the measure can get enough Republican support to make it to President Biden's desk.

While there may be progress on the infrastructure front, another key plan from President Biden is hitting a snag. And it's a member of his own part who's holding it up.

Sen. Kyrsten Sinema of Arizona says she supports many of the goals of the $3.5 billion budget plan — which focuses on education and health care costs, a Medicare expansion and climate change prevention.

But she thinks that price tag is just too hefty. She says she supports starting the conversation and will work in good faith to develop the bill.

All 50 Democrats must vote for the bill to pass it without Republican support.