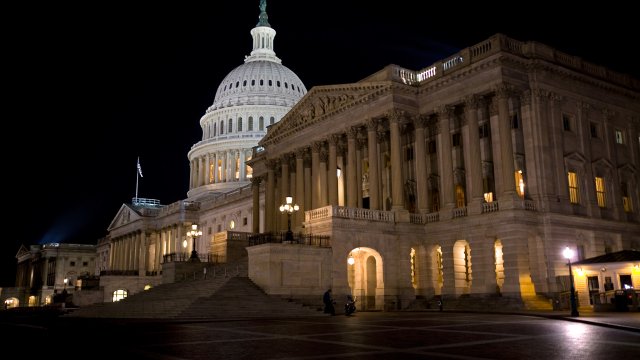 The Senate moved ahead Thursday with legislation that would create a one-time, fast-track process for raising the debt limit, overcoming a Republican filibuster and likely averting another last-minute rush to avoid a devastating federal default.

The bill fits the two goals that Republican leader Mitch McConnell had set months ago for the politically difficult vote to increase the country's borrowing authority: Democrats probably will have to pass the debt ceiling increase on their own, without GOP support, and they will have to increase it by a specific amount.

McConnell was able to deliver enough Republican votes to advance the bill Thursday when 14 Republicans sided with Democrats to end debate. That was the most precarious and unpredictable vote in the process. That support largely held with the vote on final passage of the measure later in the evening. The bill now goes to President Joe Biden's desk for his signature.

Now that it's been cleared, Democrats can use their majority to pass the debt ceiling increase itself — likely next week — without having to worry about gaining the 60 votes necessary to overcome a filibuster.

“This is the responsible path forward," said Senate Majority Leader Chuck Schumer, D-N.Y. “No brinksmanship, no default on the debt, no risk of another recession."

Still, it wasn't an easy lift for McConnell. Republicans complained privately and on the Senate floor about the deal. While they will not have to vote for the debt limit increase, they had to facilitate getting the Senate to the final vote.

“A deal has been made to give us — some of us see it this way anyway — a choice between voting for a heart attack or cancer," said Sen. John Kennedy, R-La., who voted against advancing the plan.

But some Republicans said the United States should not send signals to the rest of the world that cast doubt on its creditworthiness.

“It was the right thing to do because the last thing in the world that this country needs is a default," said Sen. Lisa Murkowski, R-Alaska.

The bill establishes a one-time, expedited process for the Senate to pass a debt ceiling increase by a specific amount with a simple majority. It was combined with unrelated Medicare legislation that will prevent payment cuts to doctors and other health care providers.

Key to the agreement is that Democrats will have to vote on a specific amount by which the debt ceiling will be lifted. The amount has not yet been disclosed, but it is sure to be a staggering sum. Republicans want to try to blame Democrats for the nation’s rising debt load and link it to President Biden’s roughly $2 trillion social and environmental bill.

But that argument ignores that the debt ceiling will have to be increased in the coming days or weeks even though the big spending package is still making its way through Congress. The increase is needed to meet financial obligations incurred over numerous presidential administrations and sessions of Congresses — decades of deficit-financed spending, already approved, that stretch years into the future.

That was also the case when Congress approved a $480 billion increase in the nation’s debt limit in October, which was enough for the Treasury Department to finance the government’s operations through Dec. 15, according to Treasury Secretary Janet Yellen.

A failure to suspend or lift the debt ceiling would lead to an unprecedented default that would allow the government to pay its bills only with the cash that comes into into the Treasury. The U.S. credit rating would likely be downgraded, interest rates on loans would soar and a recession would likely ensue. In addition, payments to seniors, veterans and others could be delayed or even stopped.