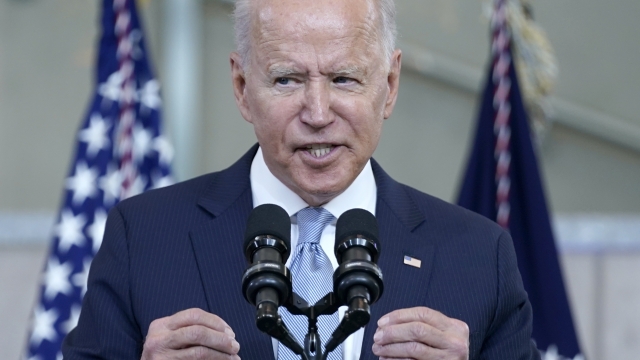 Senate Democrats say they have reached a budget agreement that envisions spending an enormous $3.5 trillion over the coming decade, paving the way for their drive to pour federal resources into climate change, health care and family service programs sought by President Joe Biden.

The accord announced Tuesday night marks a major step in the party’s push to meet Biden’s goal of bolstering an economy that was ravaged by the coronavirus pandemic and setting it on course for long-term growth. It includes a Medicare expansion of vision, hearing and dental benefits for older Americans, a goal of progressives.

But Democrats behind the agreement face possible objections from rival moderate and progressive factions and will have to work hard to convert their plans into legislation they can push through the closely divided Congress over what could be unanimous Republican opposition.

“We are very proud of this plan,” Senate Majority Leader Chuck Schumer told reporters. “We know we have a long road to go. We’re going to get this done for the sake of making average Americans’ lives a whole lot better.”

Biden will attend a closed-door lunch at the Capitol on Wednesday with Senate Democrats to focus on “getting this wonderful plan” enacted, Schumer said.

All told, the ambitious proposal reflects Biden’s vision for making the most substantive potential investments in the nation in years, some say on par with the New Deal of the 1930s. Together with a slimmer, $1 trillion bipartisan effort of traditional road, highway and public works also being negotiated, they represent close to the president’s initial $4 trillion-plus effort that could reach almost every corner of the country.

The Democrats' goal is to push a budget resolution reflecting Tuesday's agreement through the House and the Senate before lawmakers leave for their August recess. The resolution sets only broad spending and revenue parameters, leaving the actual funding and specific decisions about which programs are affected — and by how much — for later legislation.

Nonetheless, approving a budget will be a major boon for the Democrats' effort to enact their subsequent funding bill. That’s because the budget contains language that would let Democrats move the follow-up spending measure through the 50-50 Senate with just a simple majority, not the 60 votes Republicans could demand by using a bill-killing filibuster.

The actual spending legislation will likely not start moving through Congress until the fall.

Separately, a bipartisan group of senators is working to flesh out a measure that would spend around $1 trillion on roads, water systems and other infrastructure projects, another Biden priority. Biden and that group had agreed to an outline of that measure last month.

On Wednesday, Biden will push for public support of that infrastructure proposal by hosting a bipartisan group of governors and mayors at the White House. He plans to emphasize the bipartisan aspects of the proposal, as senators work to finalize details for a Thursday deadline.