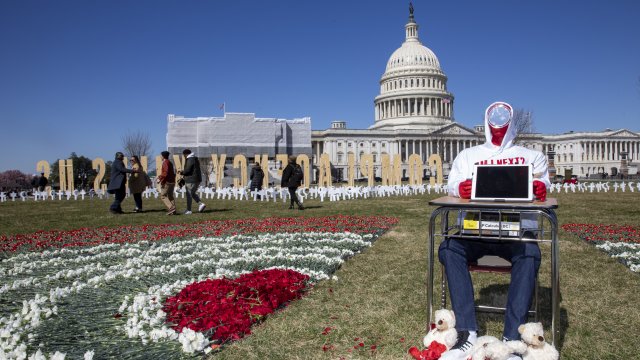 At a time when Congress can't seem to find common ground on anything related to who can get a gun, there may be some movement on getting them out of the hands of violent or mentally ill people. They're called extreme risk protection orders.

The idea behind the order is that families or law enforcement officials can petition a judge to temporarily take away access to guns from a person who could hurt themselves or others.

David Chipman is a former Bureau of Alcohol, Tobacco, Firearms and Explosives agent. He says while he was on the force he realized there were many things he could do to prevent crime rather than just solve it.

"What we need is tools that allow us to temporarily remove guns from people who we suspect are about to do something bad and buy time to figure out if that's going to occur," he explained.

He believes these orders help law enforcement do their job and empower families to get involved. And he is hoping to see more states get on board. Right now, 14 states plus Washington, D.C., have some form of extreme risk laws. The Republican-led Senate Judiciary Committee held a hearing about how Congress can get involved in the issue. Sen. Dianne Feinstein has introduced federal legislation that would encourage states to create their own laws. She pointed specifically to the shooting at Marjory Stoneman Douglas High School last year that killed 17 people as the basis for the bill.

"This young man's family could have helped if they had been legally able to do so," she added.

Upon review of the shooter's past, police found numerous warning signs. But while this legislation may be at the forefront of conversation because of mass shootings, experts say it's shown its effectiveness in other places as well, like reducing suicide rates and domestic violence issues. The Giffords Law Center says 22,000 American die by firearm suicide every year, making up two-thirds of gun deaths. Gun suicide attempts are almost always fatal, but other suicide methods have a lower mortality rate, and Giffords says 90 percent of people who survive a suicide attempt don't ultimately take their own life. The hope for gun rights advocates is that taking a gun out of a person's hands when they're most vulnerable could save their life.

Still, many, like Aidan Johnston of Gun Owners of America, are concerned about due process.

"It's ripe for abuse, not only by police but by family members, neighbors and anyone else that is allowed to submit a red flag confiscation order," he said. "While you might say the person was a danger to themselves or others, the standard was reasonable suspicion. That does not constitute due process."

"A lot of people may be worried, 'Is the government going to take guns from you?'. The answer is no," Graham said. "No one's going to take your guns, but there will be a process for law enforcement and family members to petition a court to say someone in your neighborhood is about to blow. So I'm a big fan of the Second Amendment, but at the same time, every right has limits, and what I'm trying to do with this hearing today is start a discussion."

Neither Graham nor any other Republican has signaled support for the Democrat's legislation, and previous attempts have fallen short.