Senate Confirms Stephen Biegun To No. 2 Spot At The State Department 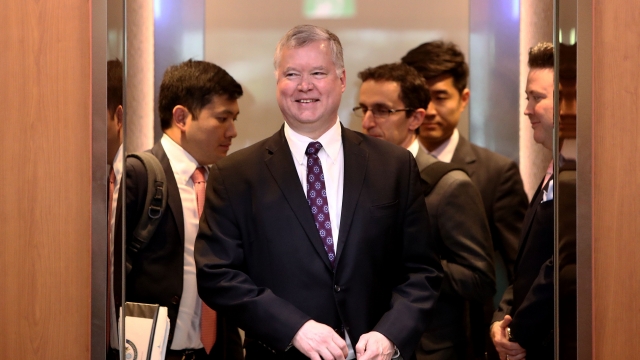 SMS
Senate Confirms Stephen Biegun To No. 2 Spot At The State Department

By Katherine Biek
December 20, 2019
He's replacing John Sullivan, who is moving to Moscow to take over as the new American ambassador to Russia.
SHOW TRANSCRIPT

Senators voted 90-3 on Thursday to confirm Biegun to the position. He's replacing John Sullivan, who is moving to Moscow to take over as the new American ambassador to Russia.

Biegun currently serves as the U.S. Special Representative to North Korea. So his confirmation to the No. 2 position in the State Department comes at a pivotal moment for the Trump administration's ongoing denuclearization talks with Pyongyang.

North Korea's set a year-end deadline for negotiations. But Biegun recently dismissed that cutoff, saying "The United States does not have a deadline. We have a goal."

Prior to joining the Trump administration in 2018, Biegun was a Ford Motor Co. executive specializing in international governmental relations. He was also an adviser to former Senate Majority Leader Bill Frist and served during the Bush administration as a senior staff member to then-national security adviser Condoleezza Rice.