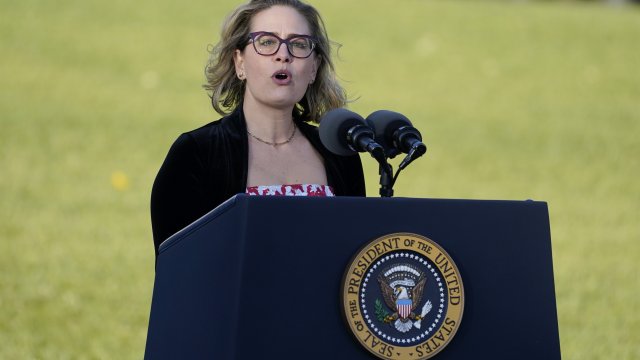 Kyrsten Sinema started out as a progressive in the Green Party — an activist against war.

"We can change a broken Washington and make it work again," Sinema said in a campaign video.

Her message resonated and rallied Arizonans to roll up their sleeves.

"We knocked on a lot of doors with our members out on the forefront to get her elected," said Mari Yepez, Arizona vice president of Unite Here Local 11.

Yepez marched with several organizations to amplify their voice on voting rights in hopes it would reach the senator they put boots on the ground to elect.

"She was supposed to protect us, protect our rights to vote — something that is our basic right," Yepez said.

But the call the action failed to sway Sinema, who ran a campaign on doing what's best for Arizonans.

"I will not support separate actions that worsen the underlying disease of division infecting our country," Sinema said.

Arizona is one of 19 states that passed more than 30 laws restricting access to voting, and Sinema voted against changes to the filibuster to pass voting rights legislation — a vote with consequences, as the Arizona Democratic party swiftly moved to censure her.

"On this issue, we are absolutely not only failing Arizonans but failing the rest of the country because voting rights are under attack on so many state legislatures," said Raquel Terán, Arizona Democratic Party chair.

Democrats who voted for Sinema expressed frustration, and the confusion has cost the senator support.

"I can understand the issues on both sides of the filibuster," Sinema voter Jeff Simpson said. "I don't know the solution. I wish I did, but I don't think I'll be voting for Sen. Sinema again."

David Wells, an Arizona State University professor and expert in American politics, says the betrayal Democrats are feeling could cost her in the long run.

"She's really burned a lot of bridges by ... how she's done things," Wells said. "For instance, how she voted no about the minimum wage option when she just turned her thumbs down on it."

In a statement released to CNN, Sinema's office defended her record.

Sinema's spokesperson Hannah Hurley said, "During three terms in the U.S. House, and now in the Senate, Kyrsten has always promised Arizonans she would be an independent voice for the state — not for either political party. She's delivered for Arizonans and has always been honest about where she stands."

While Sinema may have lost support from Democrats, she could be gaining potential votes from Arizona Republicans who voted against her.

"I kind of admire the way that she's been able to stand up," Republican voter Ricky Laney said. "I think she really wants to be an independent representative for the whole."

Voto Latino announced it launched a campaign coined "Adios, Sinema!" and committed to buy a six-figure ad during the 2024 primary to hold Sinema accountable for "obstruction of critical voting reforms that would protect the rights of millions of Latino voters."

In a survey conducted by OH Predictive Insights prior to the filibuster vote, Arizona voters weighed in on Sinema, with 48% having an unfavorable perception of her, 39% favorable and 13% with no opinion.