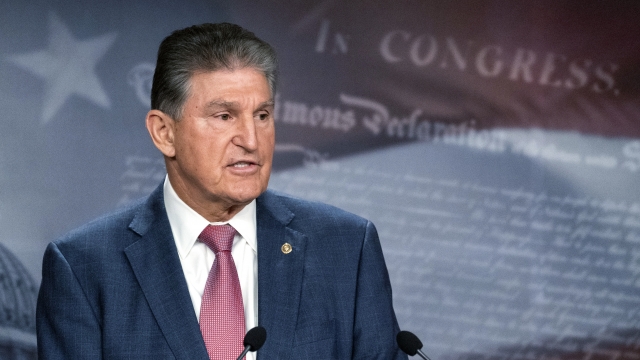 Sen. Joe Manchin wavered Monday on his support for President Joe Biden's sweeping $1.75 trillion domestic policy proposal, saying instead it's "time to vote" on a slimmer $1 trillion infrastructure package that has stalled amid talks.

The West Virginia Democrat's announcement comes as Democrats want a signal from Manchin that he will support President Biden's big package. He's one of two key holdout senators whose votes are needed to secure the deal and push it toward passage.

Instead, Manchin rebuffed progressive Democrats, urging them to quit holding "hostage" the smaller public works bill as negotiations continue on the broader package.

"Enough is enough," Manchin said at a hastily called press conference at the Capitol.

Manchin said he's open to voting for a final bill reflecting President Biden's big package "that moves our country forward." But he said he's "equally open to voting against" the final product as he assesses the sweeping social services and climate change bill.

Democrats have been working frantically to finish up President Biden's signature domestic package after months of negotiations, racing toward a first round of House votes possible later this week.

With Republicans staunchly opposed and no votes to spare, Democrats have been trying to unite progressive and centrist lawmakers around President Biden's big vision.

Progressives have been refusing to vote on the smaller public works bill, using it as leverage as they try to win commitments from Manchin and Democratic Sen. Kyrsten Sinema of Arizona, the other key holdout, for President Biden's broader bill.

Manchin, though, said he will "not support a bill that is this consequential without thoroughly understanding the impact" it has on the economy and federal debt. He wants Democrats to push ahead with the smaller public works bill of roads, highways and broadband projects that had already been approved by the Senate but is being stalled by House progressives as the broader negotiations are underway.