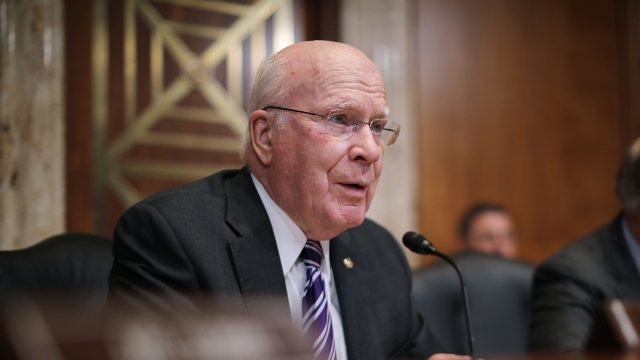 As Sen. Leahy pushes for accountability for condolence payments in the 2020 defense budget, Newsy found the payments remain stalled in Iraq and Syria.

U.S. Senator Patrick Leahy is citing a Newsy investigation into condolence payments, which revealed the military program designed to aid civilians harmed by U.S. action has stalled in Iraq and Syria.

Leahy is calling on the Pentagon to reverse course and begin using money Congress makes available for payments in the defense budget each cycle.

"It is common sense, it isn't expensive, and it can make a world of difference to those who suffer grievous harm from our actions," Leahy told Newsy.

The payments are expressions of sympathy for unintended loss, such as a civilian’s family member being killed, a severe injury or destroyed home.

Condolence payments are nearly absent in the war against ISIS, even as the U.S. takes blame for unintentional civilian deaths and injuries.

The Department of Defense acknowledges more than 1,300 accidental civilian deaths caused by U.S-led coalition airstrikes in Iraq and Syria since it began targeting ISIS in 2014. But the U.S. government is treating those recent deaths differently from those of previous generations.

The purpose of the payments is two-fold. They have long served a key humanitarian purpose, dating back as far as the Korean War.

“If you don't do it, then of course you get the allegations of arrogance, of not caring,” he said. “The insurgents' message, particularly if you have American forces involved, is ‘Hey, here come foreigners, they speak a different language. They have a different religion. Everything about them is bad.’”

David Des Roches spoke to us in his role as a professor at the Near East South Asia Center for Strategic Studies and not on behalf of DOD, which runs the center.

"You want to minimize the population of aggrieved people who become pre-radicalized," he said.

Still, Newsy found the U.S. military made just three condolence payments in Iraq since the end of 2011. And the DOD confirmed to Newsy that no payments are recorded in Syria since the beginning of U.S. operations there, even while the U.S. acknowledges scores of unintentional deaths from its own actions, "including those for whom an expression of sympathy or condolences would be appropriate."

That's why he’s pushing for expanded accountability in the 2020 defense budget, which is expected to be signed by the President.

The new budget sets aside $3 million dollars for payments and authorizes them to be made in any country.

"There are obvious challenges to investigating claims and making condolence payments when U.S. forces are not deployed on the ground, as in Syria," Leahy said. "But there are ways to do it, and rather than make excuses, the Pentagon should find solutions."

Austin Landis produces stories for Newsy's cable channel. Before joining the D.C. bureau, she reported locally while getting her journalism degree from the University of Florida. Despite some nostalgia for her native Sunshine State, she's loved making the capital her home — especially since it means never-ending museum visits, live music and connecting with people from all over the world. When on a break from AP news alerts, find her planning a trip to South America, buying concert tickets or slowly working her way through the stacks on her bookshelf. @_AustinLandis