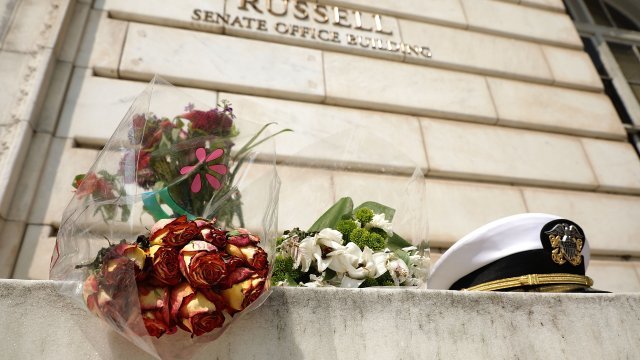 John McCain, war hero, congressman and senator, will likely have his name memorialized in the halls of Congress, an honor given to only a select few in our country's 241-year history.

At a time when party polarization is the norm, Senate Minority Leader Chuck Schumer, a Democrat, is honoring his late friend and colleague.

"I want generations in the Senate and in the world to remember him. And so I'm introducing legislation to rename the Russell Senate Office Building after John McCain," Schumer said.

"I would like decades from now, little children to ask their parents, 'Who was John McCain?' And they'll explain his sacrifice, and his patriotism, and most of all his fidelity to do the right thing as he saw it, and, when he did the wrong thing, to change," Schumer added.

In true McCain fashion, his farewell letter, read by a close friend Monday, showed gratitude and optimism in what he called "challenging times."

"I lived and died a proud American. ... We weaken our greatness when we confuse our differences with tribal rivalries that have sown resentment and violence. We weaken it when we hide behind walls, rather than tear them down. ... We have always had so much more in common than in disagreement. If only we ... give each other the benefit of the presumption that we all love our country we will get through these challenging times," McCain wrote.

Congress and the city of Washington, D.C., lowered all flags to half-staff to honor McCain. A makeshift memorial was set up just outside the Russell building. The Senate draped his seat with a black cloth, and Senate Majority Leader Mitch McConnell, who served with McCain for his entire tenure, eulogized his friend.

It's a stark difference down the road, where all flags on the White House premises were raised fully until late Monday afternoon. The White House released an official statement nearly two days after McCain's passing. The president said in part: "Despite our differences on policy and politics, I respect Sen. John McCain's service to our country." He went on to say flags will now fly at half-staff until after McCain is interred.

Many now see McCain's bipartisan approach as a virtue of the past.

"We will really be missing such an important voice for national unity. John McCain felt very strongly about virtually every issue that he tackled. But it was never based in partisanship. He didn't try to score partisan points as he worked on issues. He would work with anyone who wanted to accomplish the goal that he shared," said Republican Sen. Susan Collins.

"You don't meet many great men as you go through life. John McCain was one of them for his patriotism, for his strength, for his ability to speak truth to power, and for him to do personal acts of kindness, quietly, over and over again," Schumer said.

Both Arizona Senate seats are now open, and the governor will have to appoint a successor to McCain's seat for the next two years.