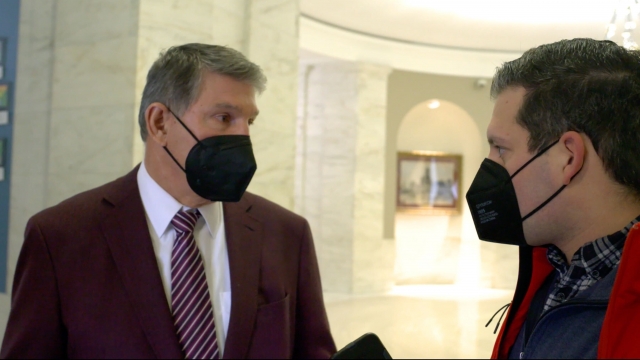 SMS
Sen. Joe Manchin Blasts Bernie Sanders As 'Not A Democrat'
By Nathaniel Reed
By Nathaniel Reed
January 25, 2022
He spoke with Newsy during an unannounced visit to address state lawmakers at the West Virginia Capitol.

In a one-on-one interview with Newsy on Tuesday, Sen. Joe Manchin brushed off Sen. Bernie Sanders' threat of supporting a primary challenger more liberal than the West Virginia senator.

NEWSY'S NATHANIEL REED: Sen. Sanders, over the weekend, said that he would be open to supporting primary challengers for you.

SEN. JOE MANCHIN: I've always had primary challenges. I've been running since 1982. And I've never ran one race there wasn't a primary. So there's nothing new for me ... Sen. Sanders is not a Democrat. You do know that, don't you?

SEN. MANCHIN: OK. He's a socialist. And he's proud. And I respect him — I think the world of him. I know who he is, and I know what he represents. It's not what I think the majority of Americans represent. I think they want a capitalist society. They want to be rewarded for work, and they want to make sure that the government is their partner, not their provider. That's the differences he and I have, but it's respectful. It's very respectful. And I learned a lot from Bernie, but we just have had conversations — we just disagree.

Sen. Manchin spoke with Newsy during an unannounced visit to address state lawmakers at the West Virginia Capitol. He responded to our questions about President Biden's "Build Back Better" social spending plan, which the president indicated he would split into "big chunks" that would be easier to pass.

REED: In terms of Build Back Better, though, what are you willing to support?

SEN. MANCHIN: It's not that. First of all, let's make sure that we understand where we are in a country. The greatest challenge we face right now — for every American — is inflation. That's the greatest. And I think the president realizes that. He recognizes that ... In climate, you know, I think that there's a lot of areas in climate that we agree. The only thing I've ever said: You cannot eliminate your way to a cleaner environment. That means, by stopping "Don't use this," "Don't do that." The rest of the world won't. They'll use whatever they have. You can innovate your way through technology. And that's what I want to do.