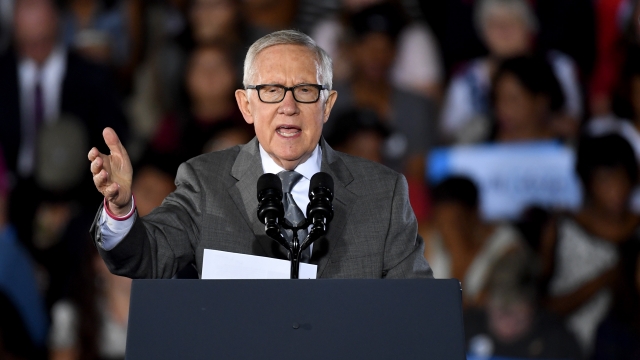 "I believe one of the failures of the Democratic Party has been the DNC. The Democratic National Committee has been worthless," Reid said.

Reid, who has served in Congress for 34 years, was on Nevada Public Radio on Wednesday when a caller asked what he thought about Democratic races in 2018.

The senator immediately turned his attention to the Democratic National Committee.

"They do nothing to help state parties. That should be the main goal they have. I developed everything in Nevada on my own. Their help was relatively meaningless," Reid said of the DNC.

Reid then offered up a few suggestions on how to improve the DNC — and its election outcomes — over the next few years. Those include focusing on three to four states each election cycle to "help them develop the infrastructure for good state party organization."

Reid also said he hopes the committee ends up selecting a full-time chair.

"Not someone like we had with that congresswoman from Florida, who was a full-time congressman and a part-time chair of the DNC," Reid said.

Reid was referring to Florida Rep. Debbie Wasserman Schultz who resigned over the summer. Her resignation came after leaked emails appeared to show that the DNC tried to undercut Hillary Clinton's primary opponent, Sen. Bernie Sanders.

Right now, Rep. Keith Ellison and Labor Secretary Tom Perez are running for the position. Ellison has vowed to leave his House seat if he wins the DNC chair.

In an interview with Politico earlier this month, Reid said, "I don't think the Democratic Party is in that big of trouble," when asked whether the party needed to reevaluate its approach following Democratic loses, including that of Clinton, in the November presidential election.

Instead, Reid laid blame on FBI Director James Comey for Clinton's loss and the party's limited seat gains in Congress.

Regardless of what — if any — changes the DNC makes, Reid predicts Democrats will have some gains in 2018.

Reid said, "With rare exception, the midterm election for a first-year president is a disaster for the president."