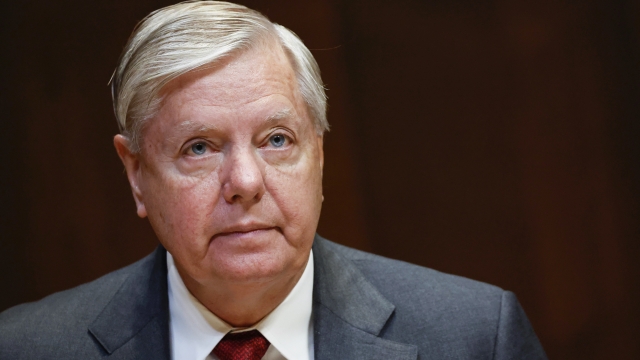 Graham, a Republican from South Carolina, has been ordered to appear before a special grand jury to testify on Aug. 23.

As expected, U.S. Sen. Lindsey Graham is challenging a subpoena to testify before a special grand jury that's investigating whether then-President Donald Trump and others broke any laws when they tried to overturn President Joe Biden's win in Georgia.

Graham, a Republican from South Carolina, received a subpoena that was issued on July 26 and orders him to appear before the special grand jury to testify on Aug. 23, his lawyers said in a court filing. Graham is seeking to have the challenge to the subpoena heard in federal court in Atlanta rather than before the Fulton County Superior Court judge who’s overseeing the special grand jury.

The senator is one of the Trump allies who Fulton County District Attorney Fani Willis wants to question as part of her investigation into what she alleges was “a multi-state, coordinated plan by the Trump Campaign to influence the results of the November 2020 election in Georgia and elsewhere.”

A year ago, Georgia's attorney general opened an investigation "into attempts to influence the administration of the 2020 Georgia General Election."

Graham had said repeatedly that he would fight the subpoena once he received it, which happened last week, according to his lawyers. He has denied meddling in Georgia's election.

In a court filing last month, Willis, a Democrat, wrote that Graham made at least two telephone calls to Georgia Secretary of State Brad Raffensperger and members of his staff in the weeks after Trump’s loss to President Biden, asking about reexamining certain absentee ballots “to explore the possibility of a more favorable outcome for former President Donald Trump.”

When he made those calls, Graham “was engaged in quintessentially legislative factfinding — both to help him form election-related legislation, including in his role as then-Chair of the Judiciary Committee, and to help inform his vote to certify the election,” his lawyers wrote in a court filing on Friday.

Graham's lawyers cite a provision of the U.S. Constitution that they say “provides absolute protection against inquiry into Senator Graham's legislative acts.” They also argue “sovereign immunity" prevents a local prosecutor from summoning a U.S. senator “to face a state ad hoc investigatory body.” And they assert that Willis has failed to demonstrate “the ‘extraordinary circumstances’ necessary to order a high-ranking federal official to testify.”

Willis' office will respond in court and expects Graham to testify before the special grand jury, spokesperson Jeff DiSantis said.

Given that Graham has been summoned to testify on Aug. 23, his lawyers are seeking expedited consideration of his motion to quash.

Graham had previously filed a federal court challenge in South Carolina to try to stop Willis' efforts to compel him to testify. Before a judge there could hold a hearing, he withdrew that case and agreed to file any challenges to a subpoena in the investigation in either state superior court or federal court in Georgia, according to a court filing.

U.S. Rep. Jody Hice, a Georgia Republican, filed a similar challenge in federal court after he received a subpoena to testify before the special grand jury. After hearing arguments from his lawyers and from Willis' office, a federal judge last week declined to quash his subpoena.

U.S. District Judge Leigh Martin May sent the matter back to Fulton County Superior Court, saying that there are at least some questions that Hice may be compelled to answer. If disagreements arise over whether Hice is protected under federal law from answering certain questions, he can bring those issues back to her to settle, she said.

Willis has confirmed that the investigation’s scope includes a Jan. 2, 2021, phone call between Trump and Raffensperger during which Trump urged Raffensperger to “find” enough votes to overturn his loss in the state.

Trump has denied any wrongdoing and has repeatedly described his call to Raffensperger as “perfect.”