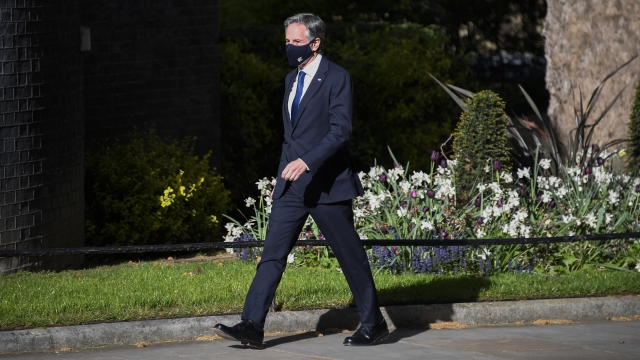 SMS
Secretary Of State Downplays Reports Of Iran Hostage Deal
By Eliana Moreno
By Eliana Moreno
May 4, 2021
Iran says a deal's been struck to get hostages back to the U.S. In exchange for billions of dollars, but the Secretary of State says that's not true.
SHOW TRANSCRIPT

There appears to be progress between the U.S. and Iran and getting both nations back in line with the 2015 nuclear deal.

Secretary of State Anthony Blinken is meeting with international leaders today for the G7 summit in London, but he's downplayed any reports of an imminent deal with Iran.

Despite that, two of the nuclear deal's biggest supporters in Congress, Democratic Senators Chris Coons and Chris Murphy, are currently touring the Middle East.

Secretary Blinken joined his counterpart for a news conference in London yesterday and he also addressed reports coming out of Iran in regards to American prisoners being held in the country.

Iran says a deal has been struck to get hostages back to the U.S. In exchange for billions of dollars, but Blinken says that's not true.

"I have no higher priority than bringing arbitrarily detained Americans, American hostages home to the United States. And that's across the board," he said. "And as Dominic said, the reports coming out of Tehran are not accurate. We are very closely engaged, ourselves, on this issue and will remain so."

While these types of prisoner swaps are common, they hold more weight between the two countries now as talks over the nuclear deal continue.