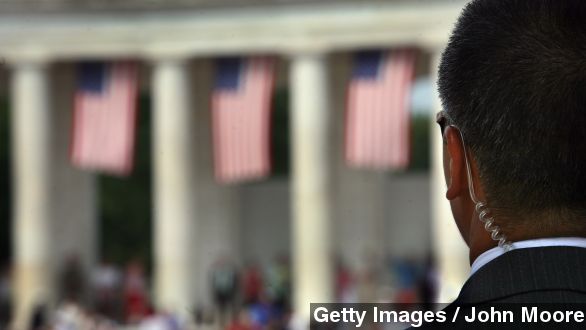 SMS
Secret Service Directors Forced Out In Leadership Change
By Jay Strubberg
By Jay Strubberg
January 14, 2015
Following a call for a change in leadership, fire directors were reportedly given the option to quit, retire, be reassigned or transfer to the DHS.
SHOW TRANSCRIPT

"Botch," "lapse," "prostitution," "drunk:" all words, unfortunately, that have been used at some point in recent years to describe the mishaps of the Secret Service.

And Wednesday, the beleaguered agency announced a shake-up that it hopes will help clean up its image.

Interim Secret Service Director Joseph Clancy said four top directors at the agency have been pulled from leadership positions and another has retired, according to The Washington Post.

Sources for The Post say those directors were given the option to quit, retire or be reassigned to different jobs within the agency.

They're also reportedly able to transfer over to the Department of Homeland Security.

In a statement to The Post, Clancy said, "Change is necessary to gain a fresh perspective on how we conduct business."

The four agents' removal comes months after former Secret Service Director Julia Pierson resigned following a little more than a year and a half at the helm. (Video via The White House)

Pierson was brought in to revamp the agency's reputation, but two White House security breeches within the same month last year put her in hot water. She stepped down the following month.

And, in December, the Department of Homeland Security's independent panel released a pretty scathing report of the Secret Service, saying it was "starved for leadership.''