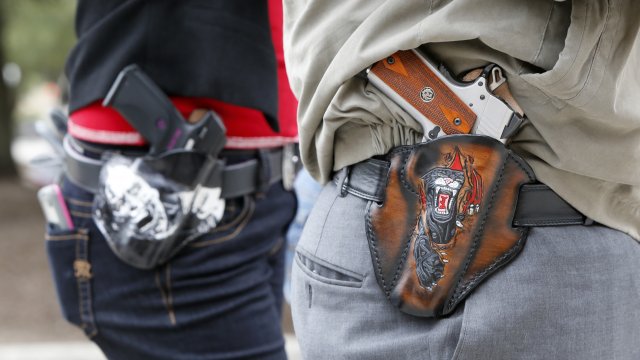 "I'd like to know that I have a chance to protect myself and protect my kids."

The number of Second Amendment sanctuaries across the U.S. has nearly doubled within the last two months, according to gun rights group Gun Owners of America.

In a Jan. 7 release, the group said, "Over 418 counties, cities, and towns have passed SASOs or sanctuary resolutions in 21 separate states." That's up from 240 sanctuaries in 19 states on Nov. 18.

That increase is pronounced in a state like Virginia, where counties and cities have recently declared themselves Second Amendment sanctuaries.

On Monday night, the Virginia Beach City Council passed a Second Amendment sanctuary resolution, joining more than 100 other localities in the state. That vote comes about seven months after a gunman killed 12 people at a Virginia Beach municipal building.

But the Virginians who support these sanctuaries stand in contrast to how most Virginians actually feel about gun laws. According to a new poll from Virginia Commonwealth University, large majorities of Virginians support "red flag" laws, expanded background checks and limits on gun ownership for people who are mentally ill.

The state's attorney general has said that Second Amendment sanctuary declarations won't have any "legal effect," but at least one Virginia sheriff has said he won't enforce existing gun laws in his county.

Democrats in Virginia say gun legislation will be a top priority during the upcoming General Assembly session, which begins Wednesday, Jan. 8.