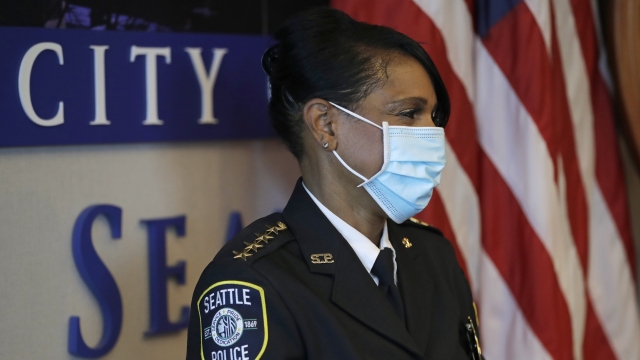 Seattle's first Black female police chief is resigning. This comes after the City Council voted to cut about $3 million from the city's $400 million budget, including a major cut to the chief's salary.

Seattle's budget cuts are just one example of defunding measures gaining steam across the country.

The budget, which still needs to be approved by Seattle Mayor Jenny Durkan, reduces the department's size by up to 100 officers, takes money from the SWAT and homeless response teams and cuts the training and recruitment budget.

Best said: "The idea of letting, after we worked so incredibly hard to make sure our department was diverse and reflects the community we serve, to just turn that all on a dime and cut it off without having a plan in place for it is highly distressful for me. It really goes against my principles and my conviction."

The announcement comes on the heels of a turbulent summer for the city of Seattle.

As with many major cities, Seattle saw sustained protests in response to the killing of George Floyd. These protests culminated in an occupation protest in downtown Seattle that garnered national attention.

The Capitol Hill Autonomous Zone, or CHAZ, led to a public back-and-forth between Seattle's mayor and Chief Carmen Best.

Best said: "I am very angry about the situation we have, and at this point I think we just want to make sure this gets resolved."

Best joins half a dozen former police chiefs from Louisville to Portland to Atlanta who have been either forced out of their position or resigned since George Floyd was killed.

And data from the police executive research forum shows that nearly half of the 258 law enforcement agencies surveyed are experiencing budget cuts.

While some departments like Seattle, Minneapolis and Los Angeles are seeing less than 1 percent of their overall police budgets cut, New York has cut a billion from its $6 billion budget.

While the idea of abolishing the police entirely is an unpopular one, Americans generally support the idea of redistributing police budgets.

According to a Newsy/Ipsos poll, 61 percent of Americans support proposals to move some money currently going to police budgets into better officer training, local programs for homelessness, mental health assistance and domestic violence.