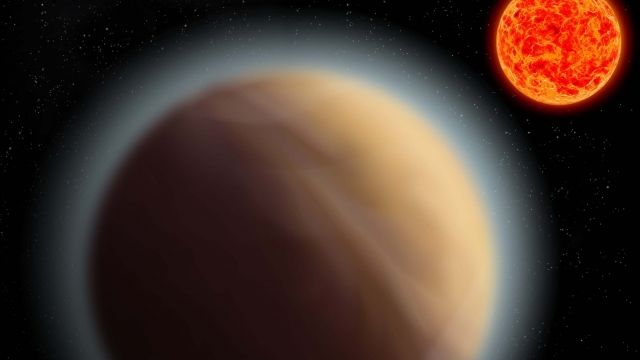 SMS
It's A First — An Earth-Sized Exoplanet With An Atmosphere
By Ethan Weston
By Ethan Weston
April 9, 2017
The Earth-sized exoplanet GJ 1132b has an atmosphere and is relatively close at 39 light years away.
SHOW TRANSCRIPT

Exoplanet GJ 1132b isn't exactly a interesting name, but it's turning out to be a pretty interesting planet.

The planet was discovered in 2015. It is nearly the same size as Earth, and at 39 light years away, it's almost our next-door neighbor. And now, researchers say the planet appears to have an atmosphere — maybe even a wet one.

This is the first time an Earth-like planet outside our solar system has been found to have an atmosphere. In the past, scientists only detected atmospheres around larger exoplanets, like gas giants and so-called super-Earths.

But don't start packing your space bags just yet. The exoplanet likely has surface temperatures of around 700 degrees.

And the planet is probably tidally locked. That means one side of the planet is constantly facing its star — the same way the same side of Earth's moon is always facing our planet.

So, it's probably not capable of sustaining life as we know it. But researchers say it's still a major step in finding exoplanets that could support life.