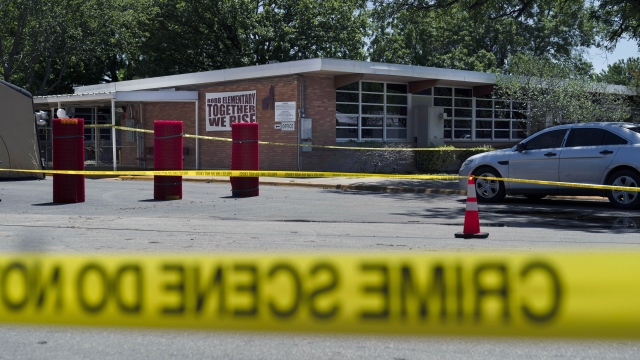 SMS
Schools Increase Security As Precaution After Uvalde Shooting
By Ben Schamisso
By Ben Schamisso
May 27, 2022
Schools are taking new precautions after a gunman killed 19 children and two teachers in Uvalde, Texas.

It’s a somber ending of the school year for millions in the U.S.

“A lot of kids didn't show up today because their parents were nervous about sending to school today," said Arielle Richardson, who has two children in elementary school.

Teachers, parents and kids are once more asking themselves: Is it safe to go to school today?

"They're aware of current events, and I try to shield them from these really tragic situations because I want them to not go to school feeling uncomfortable or scared, but it's a reality," Richardson said.

"You know, when I first heard the news, I was very sad, and I felt bad for all of the families, all of the kids and all of the kids that had to see what was going on," 14-year-old Remington Deorsey said.

From banning backpacks to deploying extra officers, schools nationwide are taking extra precautions after the killing of 19 children and two teachers in Texas.

“We should continue to take important steps as schools and districts, to make sure that we have visitor protocol, and that we have locked doors and that and that we have intruder drill protocols as and that we practice them," said Abigail Swetz, communications director at Wisconsin Department of Public Instruction.

"We're in a war for the safety of our own kids, and if we can invest in other countries’ security we ought to be investing here," said Timothy Miller, former secret service agent and former police officer.

“We need to take a comprehensive approach that includes the security, hardware and equipment, but does not exclude funding and resources for teaching and training staff to be more situationally aware," said Ken Trump, president of National School Safety and Security Services.

But there's little evidence that financing such strategies works to stop mass shootings, especially at a time when gun sales in America are breaking records.

“No matter how many metal detectors you put in, no matter how many security officers you have it, it is the wrong person on the wrong day, at the wrong time, and it can happen anywhere," said Shari Obrenski, president of the Cleveland Teachers Union. "But I do think that we try the best that we can to make our environments as safe as possible.”

Teachers and superintendents say there’s only so much they can do on their own to tackle America’s gun violence problem.

“The tanks are getting on fumes," said Tom Livezey, superintendent of Oakridge Public Schools in Michigan. "Our staff and the community alike and the kids are struggling. We're doing all that we can to try to help them.”