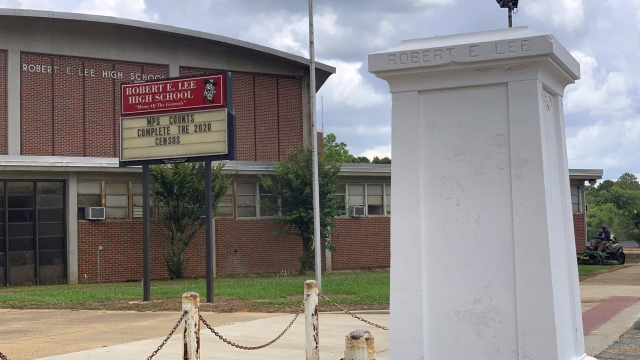 As America faces a reckoning on race, more people are pushing to rename school buildings honoring members of the Confederacy.

“When we have institutions, not just schools, that are named after Confederate leaders or those who perpetuated racism and lynchings and hate, that exacerbates feelings of race in our schools," Tony Thurmond, California State Superintendent of Public Instruction, said at a June press conference.

A tally from Education Week found as of June of this year at least 193 schools in 18 states are named after Confederate leaders. The bulk of these buildings are in the South.

Historians say buildings and statues honoring these men and their peers began popping up around 1890, years after they lost the Civil War.

“This idea that somehow these statues and these Confederate leaders represented Southern history and heritage became ingrained in Southern popular culture, indeed, in national popular culture," said Manisha Sinha, history professor at the University of Connecticut. "So it is not until the second World War, when the Nazis made racism fashionable, that people started looking at some of these names and looking at what these Confederates stood for.”

Some schools were renamed after the 2015 shooting at the Emanuel African Methodist Episcopal Church in South Carolina and the 2017 White nationalist rally in Charlottesville, Virginia that left one woman dead.

But states such as Alabama have laws on the books that limit renaming buildings or moving monuments.

“The idea that somehow renaming something or getting rid of a statue erases history is probably not the best argument," said Sinha. "You know, everyone remembers Hitler. There's no statue of him in Germany.”

In 2018, officials at a Virginia middle school named for a Confederate general reportedly estimated it would cost roughly $170,000 to rename it. But some experts dispute its costliness.

For some, a name is interwoven with a school’s identity. Monique Bryant is a graduate of Michigan’s Cass Technical High School, named after slave owner and state governor Lewis Cass. She told our sister station WXYZ that she wants the name to stay.

“A lot of the focus has been on Mr. Lewis as a slave owner," said Bryant. "Many miss the opportunity to see he was a teacher. He was looking ahead, and Cass Tech was built to educate students.”

District leaders in Charlotte, North Carolina, recently moved to begin the process to rename Zebulon B. Vance High School. A committee will poll the community to ask for suggestions for new names to replace its current one, which is named after a Confederate general and former governor of the state.

“It was something we had noticed and kind of talked about a couple of years earlier, but weren't sure at that time if it was the time to take this on," said Elyse Dashew, chair of the Charlotte-Mecklenburg Board of Education. "Right now, it feels like this is the time. This is the time to do this, there's momentum for this. People are ready for this. And so we're doing it.”