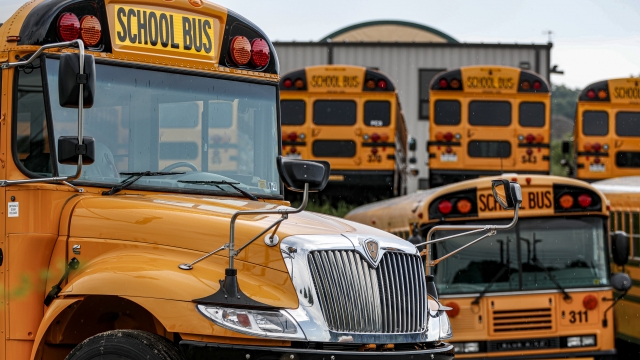 More than 25 million students ride a school bus each day, so transportation has to be a big part of a district’s reopening plan. But for those schools returning to in-person classes this fall, what will it take to get both students and drivers there safely?

“My job is to go out and make my kids happy, get them to school safe, teach our new drivers how to be a great driver," said Georgia school bus driver Eddwina Harris. "But I don't want anybody to die, so that's kind of the reality of it.”

Some medical experts are concerned.

“Riding the school bus is probably one of the highest risk endeavors that children are going to face going back to school this year," said Dr. Frank Esper, pediatric infectious disease specialist at the Cleveland Clinic. "And the reason is because the bus is a very small, confined space. And boy, does this virus really enjoys, small, confined spaces with not so good ventilation.”

Leading transportation groups recently released some recommendations for school leaders. Carrying fewer kids on a bus was advised, though one contingency plan noted that keeping six feet of social distance on a school bus would be quote “not financially nor operationally feasible.”

Other types of preventive measures that are becoming more common don’t necessarily translate to school buses.

“There was talk about putting plexiglass shields around the drivers to help prevent the spread of the coronavirus," said Curt Macysyn, Executive Director of the National School Transportation Association. "Well, the problem in some states with that was the fact that it was not going to meet with transportation regulations. And so ultimately, while well intended, the decision to put plexiglass around drivers in certain states was not going to pass legal muster.”

Deep cleaning and encouraging the use of masks are also recommended.

Enforcing some of these new responsibilities will fall to drivers — who, with a median age of 52, could be more likely to fall into a high-risk group than most kids.

“I think drivers will try their best," said Mike Berk, executive director of the Pennsylvania School Bus Association. "But I think a lot of that responsibility is going to fall on parents to educate their students to keep those masks on.”

And this comes as some places are already experiencing a driver shortage — in an industry where the median pay is about $34,000, according to the Bureau of Labor Statistics.

“In addition to the background checks, the drug and alcohol testing, the training itself, you're looking for specific type of people who can help handle student management, help manage their kids, who obviously have the skill set to drive the bus, to be able to maneuver the bus around," Berk said. "So it's not necessarily a profession that you can just easily fill.”

Roughly three percent of Pennsylvania's school bus drivers are reportedly not returning this fall due to health concerns.

There’s also a fear of drivers’ hours being slashed if a school shifts to more online classes or if routes are cut. But after a long summer, some drivers are looking forward to returning to their routes this fall — including New York, where schools recently got the green light to reopen school buildings.

“I think there's a lot of us excited about going back to school, knowing that yes, it will be different but hopefully things work out like they should,” said New York school bus driver Clifford Miller.