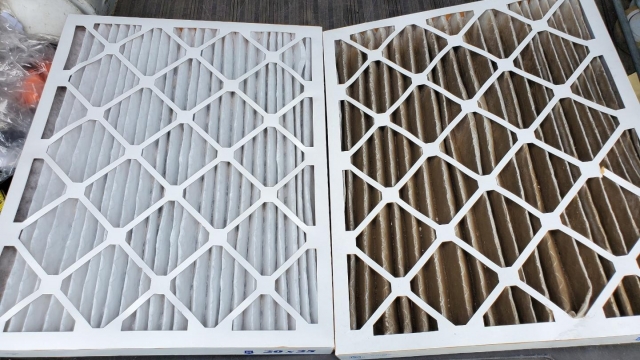 To safely reopen schools and protect against the coronavirus, the U.S. Environmental Protection Agency is pointing school districts to guidelines that advise installing higher-rated air filters. Yet, tens of thousands of American schools still need upgrades to their air conditioning systems.

Schools nationally continue to roll out plans to social distance and wear masks if they reopen in the fall. But experts say even with those added precautions, another potential threat remains: lower-rated air filters.

Most states have yet to adopt the latest national recommendations from  the American Society of Heating, Refrigerating and Air-Conditioning Engineers (ASHRAE), which the EPA has said will "help reduce risks from the virus that causes COVID-19."

Dr. William Bahnfleth, an engineering professor at Pennsylvania State University and the chair of ASHRAE's epidemic task force, says the professional society's prior recommendations to schools would help protect against body odor but not COVID-19.

"The ventilation rates in part are intended to lower the levels of bioeffluent, or in lay terms, body odor, to the point that most people will think the air quality is acceptable," he said. "Epidemics were not really incorporated into the thinking."

ASHRAE developed the minimum efficiency reporting value (MERV), a widely used rating system that assigns air filters a value between 1 and 16. The higher the number, the better the filtration. The old recommendation for schools told them to use filters with a MERV 8 rating, which is good enough to stop large particles from damaging equipment but not to protect against bacteria or virus.

Air filtration has been a growing concern since the CDC linked a COVID-19 outbreak in China to a single restaurant with poor air conditioning and ventilation. Now the new ASHRAE recommendation for schools to safely reopen is to install MERV 13 or better air filters if the equipment allows. Many places are not yet ready.

"We have a MERV 7 or 8 in every single one of our schools," said Chris Farkas, chief of operations at Hillsborough County Public Schools in Tampa, Florida.  "We're literally going system by system with an engineer, (asking) what can this system take?"

Farkas estimates about 60 schools in Hillsborough County have modern enough air conditioning systems to handle the more robust MERV 13 air filters. For those schools, he says, "It isn't difficult. It's more of the cost of the filter."

Each upgraded MERV 13 filter typically costs more than the older lower-rated MERV 8 filters, but the costs are not out of control. One online search showed the cost of an upgraded MERV 13 filter that could cover about 500 square feet to be just $16. To purchase enough filters to cover the space in a typical elementary school, it would cost roughly $1,500. If you change all of those filters out four times a year, that means the elementary school would pay approximately $6,000 above what it would cost to purchase the lower-rated MERV 8 filters.

That fix only works if you have a stable air conditioning system. "If we can move to a MERV 13 and not have to replace the air conditioning system, it is 100% the easiest thing to do and one (upgrade) we will do," Farkas said, referencing the 60 schools with newer systems in place. "Those 60 schools are not the ones I'm worried about. The other 180 are the ones that are going to keep me up at night."

For older schools that cannot handle the MERV 13, Farkas says parents nationally can still push school districts to explore alternatives such as using standalone air filter units or other localized options that can clean the air better in specific classrooms, even if there is an added cost.

Hillsborough County is exploring other options such as something called bipolar ionization and also using ultraviolet lights to help kill virus that is moving through an air conditioning system. The most practical application Farkas says the school district is exploring is to increase the frequency of changing out air filters from once a quarter to once every five weeks. Each move comes with a financial cost that Farkas says school districts should find a way to meet.

"I would rather have my son's school safe — to do that — than to try to justify why we couldn't afford it."

Mark Greenblatt is the senior national investigative correspondent for Newsy and the Scripps Washington Bureau. Follow him @greenblattmark or email a story tip about schools or other subjects to mark.greenblatt@scripps.com. Nick McMillan can be followed @ndm_visuals or emailed at nicholas.mcmillan@scripps.com.