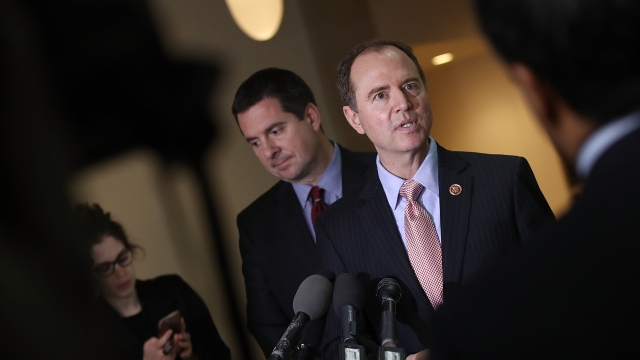 Rep. Adam Schiff says FBI Director James Comey hasn't provided his intel committee with all the information it has asked for.

The top Democrat on the House committee investigating Russian attempts to interfere in the election said the FBI isn't completely forthcoming with information.

"We're going to need the FBI to fully cooperate, to be willing to tell us the length and breadth of any counterintelligence investigations they're conducting. At this point, the director was not willing to do that," Rep. Adam Schiff said.

Schiff made the statement after a more than three-hour briefing with FBI Director James Comey.

"I would say at this point, we know less than a fraction of what the FBI knows," Schiff said.

But it seems the chair of the committee, Republican Rep. Devin Nunes, isn't in complete agreement with Schiff.

"I would have no reason to believe that any information is going to ultimately be withheld from us," Nunes said. "The director was very upfront with us."

Thursday's briefing came one day after Nunes and Schiff announced they had agreed on the parameters of the investigation.

Reince Priebus reportedly asked the FBI to denounce claims that members of President Trump's team had contact with Russia.

The House Permanent Select Committee on Intelligence's investigation will look into — among other things — whether Russia had links to any political campaigns.

Late Wednesday, The New York Times reported the Obama administration — in its final days — tried to leave a paper trail of intelligence regarding alleged ties between Trump associates and Russia. Officials were reportedly concerned the Trump administration would destroy it.

And the Washington Post reported now-Attorney General Jeff Sessions met with Russia's ambassador to the U.S. twice during the 2016 campaign. During his confirmation hearing, Sessions said, "I have been called a surrogate at a time or two in that campaign and I did not have communications with the Russians."

A spokesperson for Sessions said the former U.S. senator met with the ambassador in his official capacity and didn't discuss anything related to the campaign.

Sessions announced Thursday he had recused himself from "any existing or future investigations" related to "the campaigns for president of the United States."