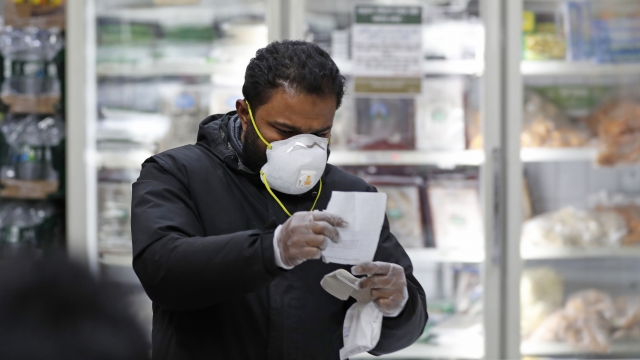 "It disgusts me that people would take advantage of a time of crisis to try and make a quick buck," said Florida Attorney General Ashley Moody.

She said she's already received hundreds of complaints about people trying to profit from the health emergency. One seller advertised eight cans of Lysol disinfectant spray — for nearly $190. Another sold N95 face masks for nearly $200 on Amazon.

Moody also is investigating what looks to her like outright scams. One involves a Florida seller creating a GoFundMe page supposedly to provide thousands of dollars for face masks for first responders, but had at the exact same time been selling masks on his site.

"Just today, in terms of essential commodities, whether that's face masks, hand sanitizers, cleaning supplies, you know, we're over 700 complaints related to those essential commodities and price gouging. We have a team in place, a rapid response team that immediately responds, gets in touch with merchants, makes sure that these prices remain at a level that consumers can attain them," she said.

"There's a special place in hell for the people who take advantage of this health crisis," New Jersey Gov. Phil Murphy said.

"It is a crime to hoard these materials or to hoard them for the purpose of gouging," Barr said.  "We're seeing things like people saying that they have a cure. They have a vaccine that's been approved by the World Health Organization.  They have testing kits, and you and they want people's credit card information or to send them this stuff. Also, seeing things like people saying they're Americans trapped overseas and desperately need help to get money to come in and make it back home."

Just this week, DOJ filed its first related enforcement case, and the department says to watch for more.

But it's not just individual bad actors. Wednesday, 33 attorneys general banded together, calling out third-party sellers like Amazon, eBay and Facebook Marketplace, and complaining that more than half of the hand sanitizers and masks sold on Amazon spiked 50% in price since the World Health Organization declared a global health emergency.

It's not just private sellers on those platforms who are the problem. "One in six products sold directly by Amazon saw similar price spikes," the letter from the attorneys general says.

Amazon said, “We have removed over half a million listings for price gouging and have taken action on over 3,900 sellers," but it did not respond to questions about its own alleged gouging.

Facebook told Newsy it already has taken down millions of ads for hand sanitizer, disinfectants and COVID test kits from its Marketplace, and has banned ads for the products.

What does the Florida attorney general say the public should expect as this pandemic increases?

"Since they declared a state of emergency, we have seen an uptick as the days go on. I don't see a reverse in that trend thus far. And so I expect that our work will be cut out for us throughout the duration," Moody said.