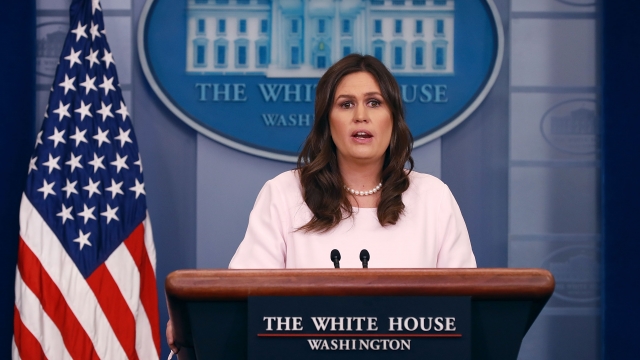 President Trump announced the move via Twitter on Thursday.

Sarah Sanders will soon be leaving her job as White House press secretary.

On Thursday, President Donald Trump tweeted, "After 3 1/2 years, our wonderful Sarah Huckabee Sanders will be leaving the White House at the end of the month and going home to the Great State of Arkansas."

Sanders was a surrogate for Donald Trump during his 2016 presidential campaign. When he won, she worked as deputy press secretary under Sean Spicer until he left in July 2017 and she took over.

No word yet on what's next for Sanders, although President Trump had one suggestion. He tweeted, "I hope she decides to run for Governor of Arkansas - she would be fantastic."

Josh Kranzberg helps oversee the daily news coverage for Newsy. After graduating from Mizzou and working at TV stations in Indiana and Washington, D.C., Josh and his wife, Shannon, came back to Columbia, where they first met. Before Newsy, Josh spent almost four years as a faculty member at the University of Missouri, where he perfected his "I'm not mad, I'm disappointed" speech. Shannon works for the university, and their black Lab, Bella, works as a dog. @JEKranzberg