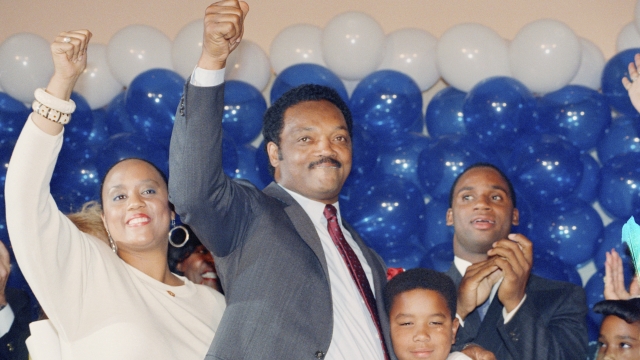 SMS
Santita Jackson Advances Civil Rights Movement Through Conversation
By Lauren Magarino
By Lauren Magarino
February 21, 2022
Rev. Jesse Jackson's daughter speaks about her father's legacy and how she is using his lessons to continue in the fight of civil rights today.

"I've always been a voracious reader, student of history, student of current events," she said.

Her most influential classroom happened to be at home with civil rights leader and politician Reverend Jesse Jackson under the same roof.

"The greatest teacher I've ever had has been my father," she continued. "You know, Reverend Jackson has been in the most hostile settings with political allies and political foes."

It was just part of the job as a member of Dr. Martin Luther King Jr.'s inner circle. And it was dangerous.

But it was in these hostile spaces that she learned how the art of conversation can drive the civil rights movement forward.

"The Santita Jackson Show," which is broadcast from Chicago on the nation's largest progressive talk radio station, is her latest vehicle to do so.

NEWSY'S LAUREN MAGARINO: Are you trying to move the needle?

SANTITA JACKSON: I'm trying to do the best that I can. And you do that one person at a time. What I hope to bring to the conversation is illumination.

That illumination starts with a value she says has been forgotten.

"We're not teaching civics anymore," Jackson said. "And with the loss of civics, you've lost civility."

One in four Americans cannot name the three branches of government, according to a 2016 survey by the Annenberg Public Policy Center.

"We've got to grow up in our politics and grow the movement forward because I think that people are beginning to see that we've all been slighted," Jackson said.

It's another point she sheds light on.

"I think that the civil rights movement, I hope, has helped America to see that the most vulnerable populations — whether it's Black people or Indigenous people, whether it's women, whoever it is — but particularly Black people because we're the readily identifiable 'other' in America. That 'It's me today, it's you tomorrow.' We're the canaries in the mine. We let you know where things are going," Jackson continued.

The key is, people have to be open enough to listen.

So cancel culture is a nonstarter.

"This cancel culture, cancel culture. I mean, come on. You don't need to do that. People are growing. Give them the space to grow," she said.

Instead Jackson calls on a lesson her father taught her.