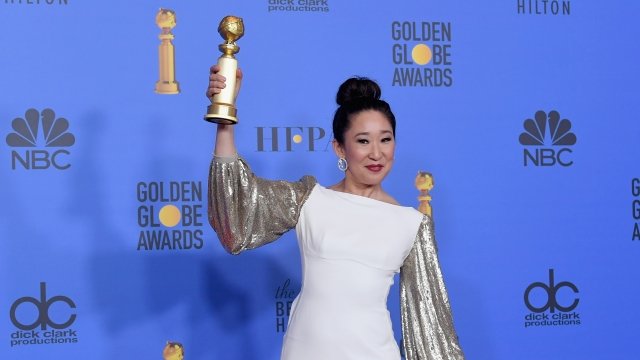 SMS
Sandra Oh Has A Historic Night At The 2019 Golden Globes
By Katherine Biek
By Katherine Biek
January 7, 2019
The "Killing Eve" star took home the prize for best actress in a television drama Sunday.
SHOW TRANSCRIPT

She started off the evening as the first Asian to ever host the awards show, which she did alongside Andy Samberg. And by the time the ceremony was over, the "Killing Eve" star had won the prize for best actress in a television drama — which makes her the first Asian performer to have multiple Golden Globes on her trophy shelf.

Oh first won a Golden Globe more than a decade ago for her supporting role on ABC's "Grey's Anatomy."

But the actress's 2019 win isn't the only historic moment to come out of the awards show. Darren Criss is now the first Filipino-American to call himself a Golden Globe winner after he won the award for best performance by an actor in a TV miniseries for his work in "The Assassination of Gianni Versace: American Crime Story."