Michigan Is The Next Big Prize In The Democratic Nomination Race 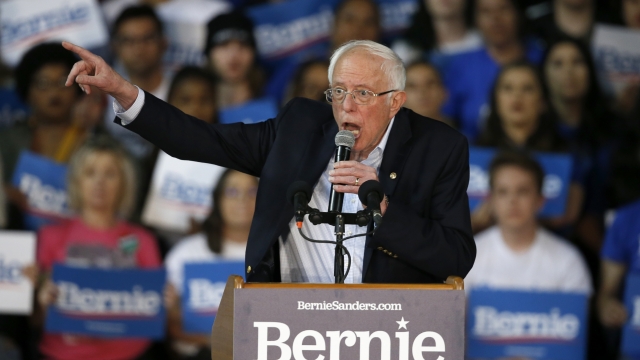 SMS
Michigan Is The Next Big Prize In The Democratic Nomination Race
By Shira Tarlo
By Shira Tarlo
March 5, 2020
In Michigan, Bernie Sanders is gearing for a comeback, while Joe Biden is looking to cement his status as the Democratic front-runner.
SHOW TRANSCRIPT

"Now, as some of you know that at the beginning of this campaign it was some 18 candidates contesting for the Democratic nomination. Well, we're down to two."

Bernie Sanders is gearing up for a comeback after Joe Biden's string of unexpected victories on Super Tuesday — and Michigan could be key to that resurgence.

Candidates and their surrogates are packing their schedules, holding multiple events across the Wolverine State ahead of the March 10 primary. Sanders even scrapped a planned rally in Jackson, Mississippi, to add a stop in Michigan — a sign that his campaign is shifting its focus to the Midwest and essentially ceding the South to the former VP.

Recent polls on the Michigan Democratic primary show Biden has a slight edge over Sanders, who pulled off a surprise victory in the state in 2016. Endorsements from the state's current and former governor, some of its biggest newspapers, and events in the state hosted by Sen. Amy Klobuchar could also power Biden to victory.

And a win in Michigan could foreshadow a candidate's strength among white working-class voters, a demographic that helped flip the rust belt for President Donald Trump in 2016.

"It's an important proof-point in terms of turning out your voters whether you're Sanders or Biden because the president won in Michigan in 2016 in a very unexpected fashion by a very close margin. And so Democrats need Michigan to take the White House. And this is a sort of trial run for, 'Can you turn out your voters out?'"

Sanders is likely to attack Biden's record on trade in Michigan, a state that has been hit hard by manufacturing losses, while highlighting his pro-union ideas.

"I helped lead the opposition against those trade agreements. Joe Biden supported them."

Biden appears ready to battle Sanders over his record.

"My record has been so thoroughly investigated. You guys rightly looked at it, every vote I've ever taken. Now let's go to Michigan, Bernie. Let's see if that's true. I'm the guy that helped bail out the automobile industry. What did you do, old buddy?"

Michigan has 125 delegates up for grabs — the biggest prize of the March 10 primaries.