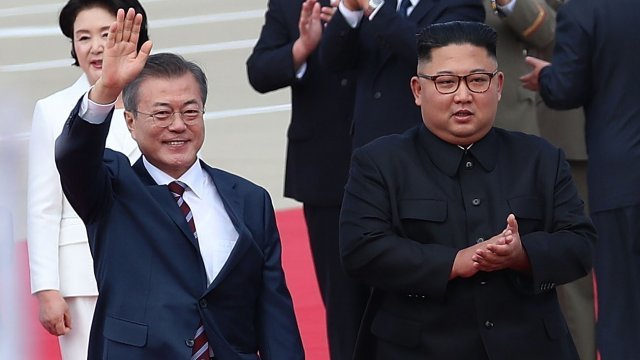 SMS
US Sanctions Could Make Or Break Diplomacy With North Korea In 2019
By Matt Picht
By Matt Picht
January 2, 2019
North Korean leader Kim Jong-un is sending strong signals that he wants the U.S. to relax sanctions before he moves any closer to denuclearization.
SHOW TRANSCRIPT

The growing but still fragile peace process between North and South Korea is going to be put to the test in 2019, and what happens next will largely depend on the U.S.

During his annual New Year's address, North Korean leader Kim Jong-un reiterated his willingness to denuclearize the Korean peninsula. But he also made it clear that the country was expecting something from the U.S. in return: something like relief from the punishing economic sanctions on the country.

John Carl Baker, a Senior Program Officer at the nuclear proliferation think tank Ploughshares Fund, told Newsy: "He's clearly putting the emphasis on the United States, he's saying, like the ball's in your court, you need to do something now, which is going to show us that you're genuine."

Sanctions are a major issue in the complicated U.S.-North Korean diplomatic process. The White House has been adamant that it will only relax those sanctions once the country gets rid of its nuclear weapons; North Korea insists it needs normalized relations with the U.S. before it can abandon its nuclear program.

Those sanctions also are weighing down the ongoing rapport between North and South Korea. Both countries have agreed to collaborate on some joint economic projects, but South Korea can't participate in those projects without the risk of running afoul of international and U.S. laws.

And sanctions relief is just one of a host of issues plaguing negotiations between North Korea and the U.S. Both sides have yet to agree on what denuclearization actually looks like, or whether the U.S. needs to pull out of the region for denuclearization to take place.

Right now, all sides seem to be pinning their hopes on a second summit between Kim and President Trump, which both leaders have expressed interest in. Direct talks between the two leaders might be the one thing that breaks the diplomatic logjam on the peninsula.

Baker said, "The United States is going to have to be willing to pursue some of the things or put them on the table that it hasn't been willing to so far. ... The North Koreans clearly want to deal with Trump, they think that he's the vehicle that they have to actually get something across and get something past the finish line."