San Francisco's FogCam Will Be Switched Off After 25 Years 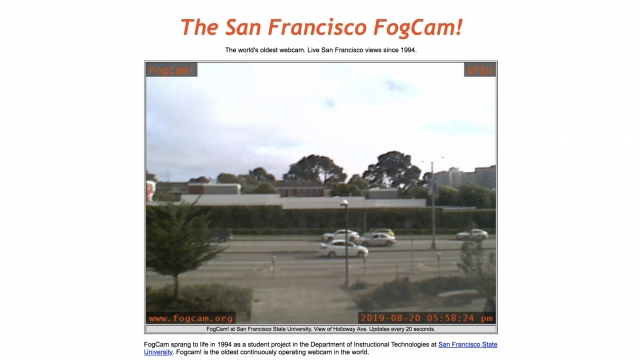 It's the end of an era. The world's "oldest continuously operating webcam" will be unplugged after 25 years of streaming.

What you're seeing right now is the FogCam streaming Holloway Avenue in San Francisco, California. The stream updates every 20 seconds.

Jeff Schwartz and Dan Wong started the FogCam in 1994 when they were students at San Francisco State University. It originally started as a project to help give others an idea of what it was like to be a student there.

Schwartz told the SFGate the webacam is being taken down because they "no longer have a really good view or place to put the camera."

On Twitter, its creators wrote: "The internet has changed a lot since 1994, but Fogcam will always have a special place in its history."

The webcam will be switched off on Aug. 30, but the website will be kept up "for sake of posterity."