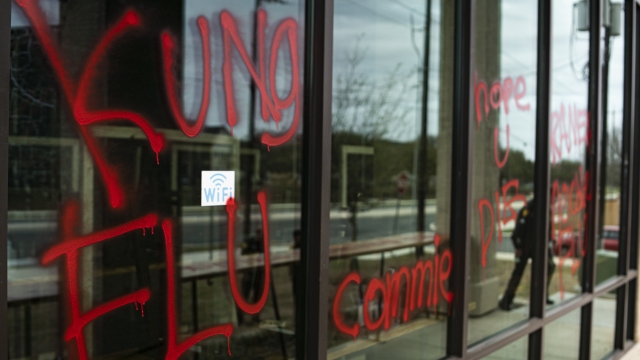 "I knew that there could be a chance of this, to get vandalized or myself being attacked," said Nguyen, owner of Noodle Tree.

This comes days after he appeared on CNN to criticize the Texas governor for lifting the mask mandate.

On CNN, Nguyen said: "The governor doesn't have us Texans' interest at play. I think it's about personal interest. It's selfish and cowardly."

Nguyen is immunocompromised and he is currently undergoing treatment for lymphoma.

"I had hesitation initially to go on because of the backlash. But at the end of the day, I realized that it needed to be said," said Nguyen.

New numbers from reporting center Stop AAPI Hate: They received 3,795 anti-Asian hate incidents nationally since the start of the pandemic. Nguyen is an example. His CNN appearance has been followed by death threats, harassment and low restaurant ratings.

"That's nothing but a bigoted, cowardly move to do something like that. It's not San Antonio by any means," said Chief William MacManus of the San Antonio Police Department.

Newsy's Cat Sandoval: "The graffiti says go back to China, but you're not even Chinese."

After his restaurant was targeted, the community came together to clean and wipe away messages of hate. Instead of graffiti, there are now cut-out hearts pasted by volunteers into the storefront doors. One heart reads: "Love is Stronger Than Hate."

"Those were strangers, complete strangers," says Nguyen. "And that, for me, was a very powerful message. The negativity, the initial hate, it brought us together. And that's what us Texans do."