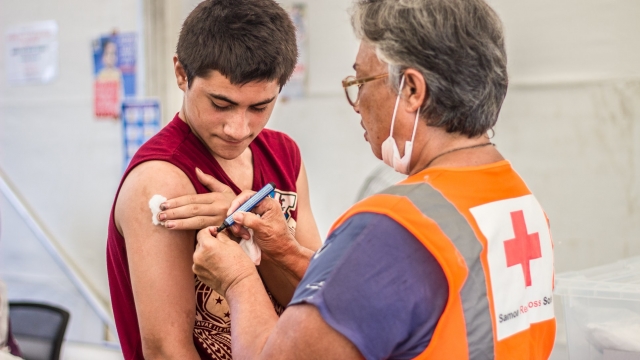 More than 3,700 cases of measles have been reported in Samoa, according to government data released Monday.

The prime minister of Samoa announced a temporary government shutdown in response to a deadly measles outbreak sweeping through the country.

Almost all of Samoa's government and public services will be closed on Thursday and Friday so employees can help with vaccination efforts.

More than 3,700 cases of measles have been reported in Samoa, according to government data released Monday. Of the 53 people who have died so far, the majority of them are children under the age of five.

Samoa declared a state of emergency because of the outbreak last month. It's shut down schools, banned minors from public gatherings and mandated that all citizens get the MMR vaccine.

More than one-quarter of Samoa's population has gotten vaccinated since the country's mass vaccination campaign started on Nov. 20.

But government officials say it's been challenging to boost vaccination rates because of misinformation being spread by so-called "anti-vaxxers." People are also fearful about the safety of the vaccine after two Samoan children died in 2018 when their vaccinations were incorrectly mixed.

The World Health Organization says 95% of a country's population needs to be vaccinated against measles in order to prevent outbreaks.