Same-Sex Mice Give Birth Thanks To Gene Editing 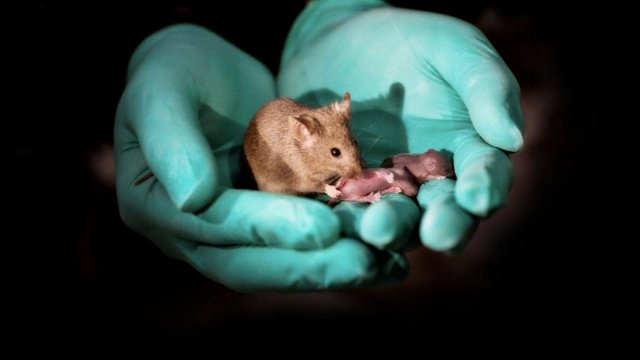 SMS
Same-Sex Mice Give Birth Thanks To Gene Editing
By Ahmed Jawadi
By Ahmed Jawadi
October 12, 2018
Two mothers gave birth to a total of 29 mice that grew into adulthood.
SHOW TRANSCRIPT

According to the study published Thursday, researchers were able to accomplish the feat by genetically editing embryonic stem cells containing one parent's DNA and injecting it into the unfertilized eggs of another.

A total of 29 mice from two mothers were born using 210 embryos, and all 29 of them were able to grow into adulthood. Even more impressive, the engineered mice were still able to have babies of their own.

They say the reason for the experiment was to explore why some animals – like certain reptiles and fish – can reproduce without a partner and others cannot, and to figure out what it would take for same-sex reproduction in mammals.

The team was also able to produce mice from two fathers, but unfortunately the offspring only survived for a couple of days. This isn't the first time scientists were able to breed mice from same-sex partners, but previous experiments weren't nearly as successful.

Despite the researchers' advancements in gene-manipulation technology, many scientists believe it'll be some time before it can work with humans, as the tech is still too risky and impractical.

Weight Loss Surgeries Up During Pandemic