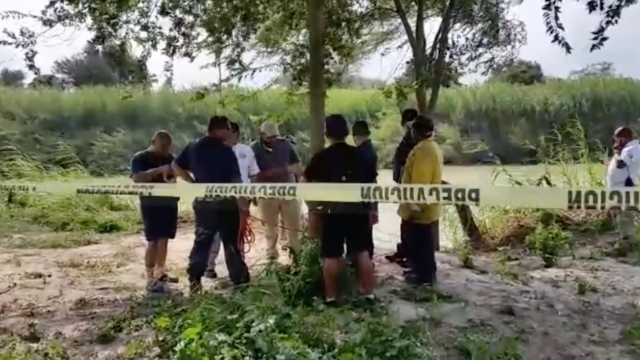 SMS
Photo Of Lifeless Migrant Father And Daughter Sparks Controversy
By Caitlin Baldwin
By Caitlin Baldwin
June 26, 2019
The Salvadoran family had been waiting in a migrant camp in Mexico for two months to be able to apply for asylum in the U.S.
SHOW TRANSCRIPT

This video — which we want to warn you, is graphic and may be disturbing to some — shows a Salvadoran father and daughter's lifeless bodies lying face-down along the banks of the Rio Grande, the girl's head tucked under his shirt with her arm draped over his neck. Images of their bodies are being spread to show the realities many migrants face trying to make their way to the U.S. border for asylum.

LaJornada journalist Julia Le Duc reports that the man, Óscar Alberto Martínez Ramírez, and his daughter Valeria were crossing the river when they were swept away and drowned. His wife, Tania Vanessa Ávalos, watched from the other side of the river.

Ávalos testified that she and her family had been waiting in a migrant camp in Mexico for two months under a humanitarian visa. She said her husband was desperate to present their asylum claims to the U.S. government and decided on Sunday that they would make their way to the border. But the bridge was closed, and that's when Ramírez attempted to cross the river.

Their story is similar to those of thousands of migrants who are waiting in Mexico as they seek asylum in the U.S. They're waiting there because the Trump administration recently started capping the number of asylum applications accepted at ports of entry. That policy, known as "metering," means each port will only let around 40 to 90 people apply for asylum a day. As Newsy's Ben Schamisso reported last year, critics say that policy is meant to slow down the asylum process.

But U.S. Customs and Border Protection says metering is sometimes necessary because of the current limited detention space, resources and funding.

U.S. officials have described the immigration system as "at its breaking point." Last month, more than 144,000 immigrants were apprehended at the southwest border — some at legal ports of entry, but most after crossing illegally. At the time, the acting head of Customs and Border Protection said, "We are in a full-blown emergency, and I cannot say this stronger: The system is broken."

But having asylum-seekers wait in Mexico brings up other issues. As Amnesty international reports, some who are forced to return to Mexico fear for their safety and face "widespread lack of access to attorneys" while their cases pend.

The U.N.'s refugee agency is calling for immediate action to prevent more migrant deaths. UNHCR's high commissioner says, "The deaths of Oscar and Valeria represent a failure to address the violence and desperation pushing people to take journeys of danger for the prospect of a life in safety and dignity. This is compounded by the absence of safe pathways for people to seek protection, leaving people with no other choice than to risk their lives."

Ávalos will return to El Salvador, where the government has said it will pay for her husband and daughter's bodies to be returned to for burial. El Salvador's minister of foreign affairs pleaded with residents to remain in the country while its issues are worked out, saying: "Don't risk it. Life is worth a lot more."