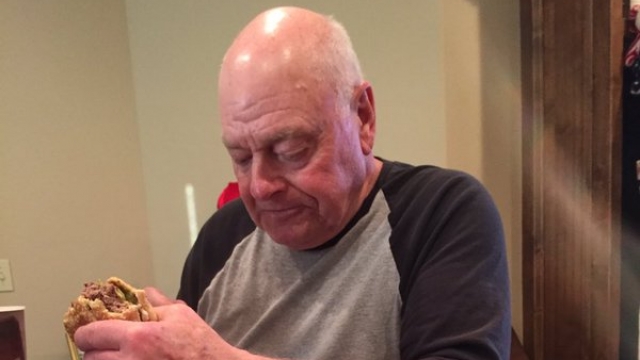 SMS
Sad Papaw Gives Us A Chance To Taste The Burgers His Grandkids Missed
By Ryan Biek
By Ryan Biek
March 21, 2016
The Twitter-famous granddad is hosting a cookout in Oklahoma, and everyone's invited.
SHOW TRANSCRIPT

The man known as "sad Papaw" became Twitter-famous after cooking burgers for his six grandchildren and being stood up by all but one of them. But now, he's giving his grandkids a chance to redeem themselves at an open-invite cookout he's hosting on Saturday.

His grandson said in a tweet the party in Oklahoma is for anyone who wishes to attend. He told KVUE at least 3,000 people have told him they're coming.

It could be a lot more though, considering how angry the Internet was the first time Papaw's guests were no-shows.

Burgers will reportedly be sold for $2. But if you're not hungry, you'll still be able to buy an official Papaw T-shirt.