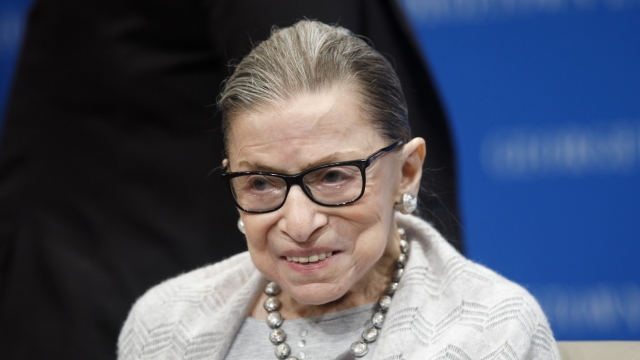 Supreme Court Justice Ruth Bader Ginsburg was released from Johns Hopkins Hospital on Sunday. A court spokeswoman said she is at home now and doing well.

On Friday night, the 86-year-old justice went to Sibley Memorial Hospital in Washington, D.C., according to a statement. She was later transferred to Johns Hopkins Hospital in Baltimore for further evaluation and treatment for a possible infection. After receiving IV fluids and antibiotics, her symptoms subsided and she was discharged Sunday morning.

Ginsburg has had a number of health scares in the past year, including a stomach bug earlier this month that led to a rare absence during opening arguments. In August, she had surgery to remove a "localized malignant tumor" from her pancreas after radiation treatment. And last December she had surgery to remove malignant lung nodules. During her recovery from that operation, Ginsburg missed public court sessions for the first time since she was appointed in 1993. The celebrated justice has fought cancer two other times as well: She had surgery for early-stage pancreatic cancer in 2009 and was treated for colon cancer in 1999.

Despite her health challenges, Ginsburg has remained active in court. In September, she said, "I think work is what saved me, because instead of dwelling on my physical discomforts, if I have an opinion to write or brief to read, I know I've just got to get it done and have to get over it."

Ginsburg has vowed to stay on the bench as long as she's "healthy and mentally agile."