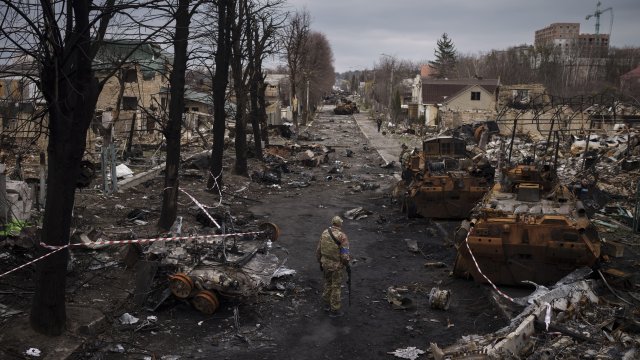 International outrage is growing as more atrocities from Russia’s war in Ukraine are laid bare.

After images of tortured civilians strewn in the streets in the liberated Kyiv suburb of Bucha caught the world’s attention, Ukrainian officials say Russia has started using mobile crematoriums to destroy evidence of war crimes. Mariupol’s mayor is calling it “the new Auschwitz.”

Potential witnesses are being identified through filtration camps, according to a security officer speaking with Newsy:

"There are several Russian filtration camps, and the biggest is near Mariupol city," said Vasyl Popatenko, a Ukrainian security officer. "All people who want to leave, evacuate from the cities, they should move through this camp, and there are Russian officers, they're searching for Ukrainian soldiers, for the families of our soldiers, local governments and other activists who support Ukraine."

Popatenko says they’re also kidnapping civilians as pawns to use in prisoner exchanges.

Those who stay face more heavy fighting and Russian airstrikes. Most of the 160,000 remaining residents have no heat, medicine, water or means of communication, according to the British Defense Ministry.

A Red Cross convoy spent five days trying to reach the besieged city but said “security conditions on the ground made it impossible to enter.”

More abductions are happening in another southern city, Kherson.

"I know for sure that people who have been kidnapped and then later on they are released maybe one or two days later, and some have been released three weeks later, they surely have physical injuries," said Igor Kolykhaev, mayor of Kherson.

Bombardment continues in Mykolaiv. Doctors Without Borders says it witnessed explosions around an oncology hospital and at a nearby children’s hospital. It suspects Russian forces used illegal cluster bombs.

"Unfortunately, we cannot know what they are doing with people on the occupied territories, but we can only think that the situation is the same as it was in Bucha and other cities in Kyiv region," Popatenko said.

The security officer says members of Russia’s internal security service, the FSB, are operating in southern cities, searching for people who oppose Russia and their families.

"There is no guarantee that they're gonna be stopped here in Ukraine if you don't help us," said Wladimir Klitschko, member of the Kyiv Territorial Defense and brother of Kyiv's mayor. "If we fail here in Ukraine, you're gonna fail too guys, because this imperialistic ambitions are bigger than you think."

The Pentagon warns that Ukraine’s eastern regions of Luhansk and Donetsk could see violence intensify, and as Russian troops prioritize the area, civilians are forced to flee.