Russian-Speaking Community In U.S. Is Terrified By War 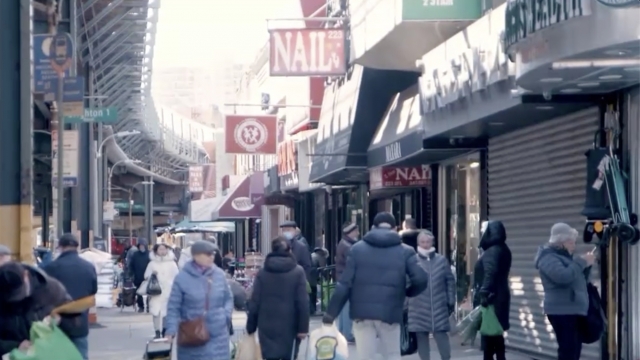 SMS
Russian-Speaking Community In U.S. Is Terrified By War
By Axel Turcios
By Axel Turcios
March 7, 2022
People whose families are from Russia and Ukraine fear for their families who are back there.

The Russian-speaking community in New York City is terrified by the war in Ukraine.

Many of them are part of a thriving Jewish community living in the "Little Odessa" neighborhood in Brooklyn.

The neighborhood is made up of Ukrainians, Russians and Belarusians, many of which fear for the lives of their families back home.

Their home country is currently being torn apart by Russia's invasion, and Russia is being lashed with economic sanctions.

"The sanctions of course don’t allow us to use card method payments," Dubinskiy said.

Dubinskiy's family is in Moscow.

"My family is in Russia, and they’re planning to move here, but it’s not everything easy right now because of the flights, they canceled the flights," Dubinskiy said.

Little Odessa, named after the port city in Ukraine, is in the Brighton Beach seaside neighborhood. It's an enclave of Jews who came to the United States as refugees from the former Soviet Union, arriving from Ukraine, Belarus and Russia, leaving friends and family behind.

"They are suffering now, many relatives of my friends," Arister said. "I don’t have somebody who supports Russian aggression towards Ukraine. All of my friends are people from college and they definitely oppose the war in Ukraine."

Arister doesn’t think the Kremlin is currently targeting Jews, but he worries that could change.

"Now is drastic change from regular authoritarian government in the country to an extra aggressive towards its neighbor," Arister said. "Probably it’s going to suppress their freedoms and interfere with people’s lives."

Little Odessa is home to one of the biggest Russian communities in New York City. Walking along Brighton Beach Avenue, you can see the solidarity toward the Ukrainian people. However, many residents say they are afraid to speak Russian in public in fear of retaliation.

"I’m afraid if people hear my Russian accent, they’re going to ask me where I’m from," Ivgenia Filonets, a Belarusian living in New York City said. "I’m from Belarus, and my country was involved in this conflict, and I’m scared I’m going to be declined services."

The American Jewish Committee estimates that there are 300,000 Russian-speaking Jews in New York.