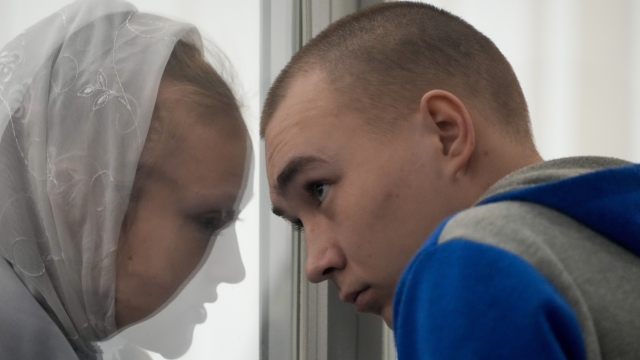 Ukrainian prosecutors are investigating thousands of potential war crimes as the world has pushed for Russia to be held accountable for its invasion.

A Ukrainian court sentenced a 21-year-old Russian soldier to life in prison Monday for killing a civilian, sealing the first conviction for war crimes since Moscow's invasion three months ago.

Sgt. Vadim Shishimarin pleaded guilty to shooting a 62-year-old man in the head in a village in the northeastern Sumy region in the early days of the war.

He testified that he shot Oleksandr Shelipov after being ordered to do so. He told the court that an officer insisted that Shelipov, who was speaking on his cellphone, could pinpoint their location to Ukrainian forces.

Ukrainian prosecutors are investigating thousands of potential war crimes, as the world has pushed for Russia to be held accountable for its invasion. Russian forces bombed a theater where civilians were sheltering and struck a maternity hospital. In the wake of Moscow's withdrawal from towns around Kyiv weeks ago, mass graves were discovered and streets were strewn with bodies in towns such as Bucha.

The war's effects have also been felt well beyond Ukraine, pushing energy and food prices higher. The United Nations said the conflict has helped push the number of people displaced worldwide to the highest level on record, with more 100 million people driven from their homes across the globe.

Ukrainian President Volodymyr Zelenskyy called for "maximum" sanctions against Russia on Monday at the World Economic Forum in Davos, Switzerland.

He said by video that sanctions needed to go further to stop Russia's aggression, including an oil embargo, all of its banks blocked and cutting off trade with Russia completely.

Zelenskyy says his country has slowed Russian advances and his people's courage has stirred unseen unity of the democratic world.

He said sanctions need to go further to stop Russia's aggression, including an oil embargo, blocking all of Russia's banks and cutting off trade.

On the battlefield, Russian forces have stepped up shelling in Ukraine's eastern industrial heartland as they press their offensive in the region that is now the focus of fighting.

Grinding battles in the Donbas, where Ukrainian and Russian forces are fighting town by town, have forced many civilians to flee their homes.

Western support — both financial and military — has been key to Ukraine's defense, helping their outgunned and outnumbered forces to repel Russia's attempt to take the capital of Kyiv and fight them to a standstill in other places. In the face of those setbacks, Moscow has outlined more limited goals in Ukraine, with its sights now on trying to expand the territory that Russia-backed separatists have held since 2014.