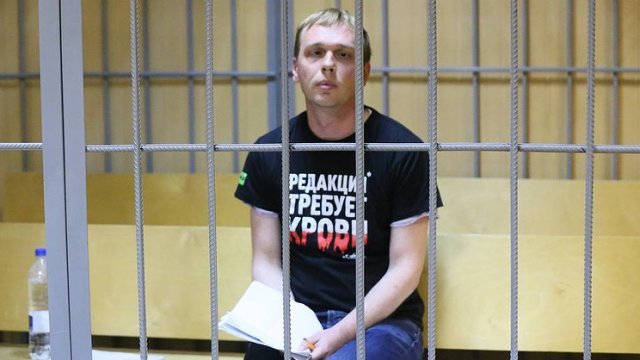 Demonstrators in Russia are taking to the streets to support a free press in a country with a legacy of persecution and violence against journalists.

The trigger for protests was the June 6 arrest of Ivan Golunov, an investigative reporter for the news site Meduza. Police said he possessed illegal stimulants that he intended to sell, a charge that could carry 20 years in prison. But Golunov's supporters say police planted the drugs.

The demonstrations led to a surprising reversal by Russian authorities, who freed the journalist Tuesday and suspended the officers who arrested him.

But street demonstrations continued Wednesday, even after authorities dropped the charges.

Police responded to the demonstrations en masse. They arrested more than 500 people, including a leading opposition politician, for participating in an unauthorized rally.

Then on Thursday, the Kremlin got involved: It announced two police major generals in Moscow and the city's drug control chief had been fired for their roles in opening a criminal case against Golunov, who was known for his exposés on local government corruption in Moscow.

Russia is notoriously dangerous for journalists. The Committee for Protection of Journalists says 58 reporters have been killed in the country since 1992, with 38 targeted for murder. Anna Politkovskaya, famous for her critical coverage of the Russian military in Chechyna, was killed in her Moscow apartment in 2006. Anastasiya Baburova was killed after covering a 2009 news conference by a human rights lawyer who was also shot dead.

Golunov's arrest and his insistence in his innocence inspired solidarity among journalists. Russia's three leading newspapers published the same front-page editorial protesting his detainment with the headline, "I am/We are Ivan Golunov."

Even government news organizations decried the charges. And when Golunov was released, cheers came from Maria Zakharova, a spokeswoman for the Russian Foreign Ministry. "The best day," she said. "In tears. Happiness."