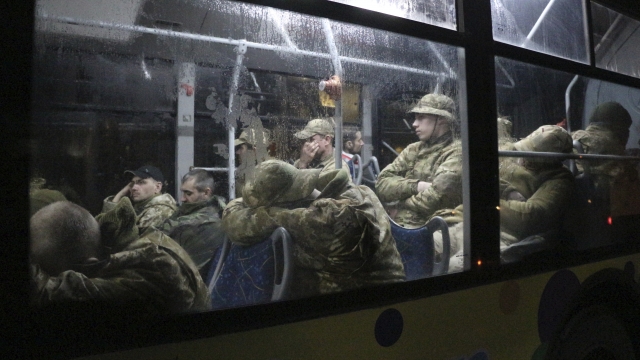 Russia has begun turning over the bodies of Ukrainian fighters killed at the Azovstal steelworks, the fortress-like plant in the destroyed city of Mariupol where their last-ditch stand became a symbol of resistance against Moscow’s invasion.

Dozens of the dead taken from the bombed-out mill’s now Russian-occupied ruins have been transferred to the Ukrainian capital, Kyiv, where DNA testing is underway to identify the remains, according to both a military leader and a spokeswoman for the Azov Regiment.

The Azov Regiment was among the Ukrainian units that defended the steelworks for nearly three months before surrendering in May under relentless Russian attacks from the ground, sea and air.

It was unclear how many bodies might remain at the plant.

Meanwhile, Russian forces continued to fight for control of Sievierodonetsk, an eastern Ukrainian city that is key to Moscow’s goal of completing the capture of the industrial Donbas region.

President Volodymyr Zelenskyy said Ukrainian forces were holding their positions in the city amid fierce fighting in the streets as Russia tries to deploy more forces.

“But it is the 103rd day, and the Ukrainian Donbas stands. It stands firmly,” he said in his nightly address to the nation.

Zelenskyy also said Moscow's forces intend to take the southeastern city of Zaporizhzhia, home to more than 700,000 people, a move that could severely weaken Ukraine’s standing and allow the Russian military to advance closer to the center of the country. 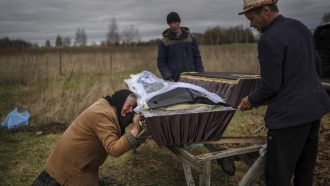 Explainer: At 100 Days, Russia-Ukraine War By The Numbers

“In the Zaporizhzhia region ... there is the most threatening situation there,” Zelenskyy said.

The Ukrainian fighters' dogged defense of the steel mill frustrated the Kremlin's objective of quickly capturing Mariupol and tied down Russian forces in the strategic port city.

The defenders' fate in Russian hands is shrouded in uncertainty. Zelenskyy said more than than 2,500 fighters from the plant are being held prisoner, and Ukraine is working to win their release.

The recovery of their remains from the Azovstal ruins has not been announced by the Ukrainian government, and Russian officials have not commented. But relatives of soldiers killed at the plant discussed the process with The Associated Press.

Ukraine on Saturday announced the first officially confirmed swap of its military dead since the war began. It said the two sides exchanged 320 bodies in all, each getting back 160 sets of remains. The swap took place Thursday on the front line in the Zaporizhzhia region.