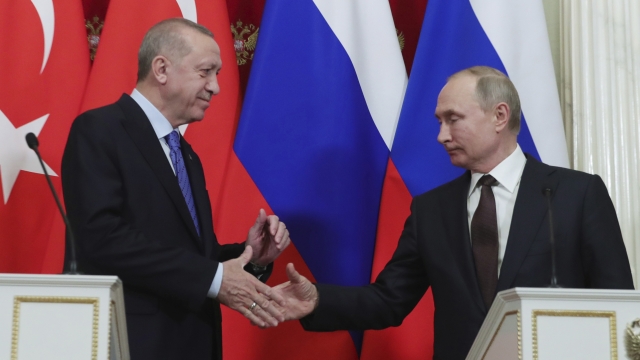 SMS
Russia And Turkey Have Reached A Cease-fire Deal In Northwest Syria
By Bailey Vogt
By Bailey Vogt
March 5, 2020
The countries' leaders said the cease-fire will be take effect at 12:01 a.m. Friday.
SHOW TRANSCRIPT

After more than six hours of talks in Moscow, the two leaders said a truce will be enforced in the Syrian province of Idlib beginning at 12:01 a.m. Friday.

Conflict in the region threatened to start a war between Russia and Turkey. They chose opposing sides in the battle between Syrian President Bashar al-Assad and Syrian rebels.

Putin, who sided with Assad, said he hopes the cease-fire will deescalate the conflict and "contain a growing humanitarian crisis,” according to The Associated Press.

Erdoğan said they also agreed to help over 900,000 refugees, who fled the area due to the fighting, resettle.

Along with the cease-fire, Russian and Turkish troops will set up a security corridor along a 7-mile stretch of critical highway, with joint patrols beginning March 15.