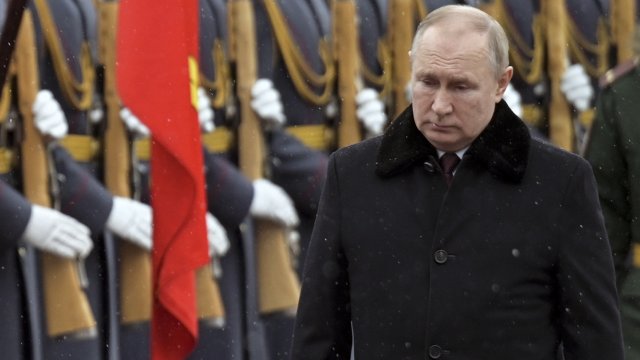 In a televised address early Thursday, Putin says the action comes in response to threats coming from Ukraine.

He adds that Russia doesn’t have a goal to occupy Ukraine. Putin says the responsibility for bloodshed lies with the Ukrainian “regime.”

Putin also is warning other countries that any attempt to interfere with the Russian action will lead to “consequences they have never seen.”

Guterres opened an emergency meeting of the U.N. Security Council late Wednesday saying the day was full of rumors and indications that an offensive against Ukraine is imminent.

In the recent past, Guterres says, he never believed rumors that Russia would invade Ukraine and was “convinced that nothing serious would happen.”

But, he adds: ”I was wrong, and I like not to be wrong again. So if indeed an operation is being prepared I have only one thing to say from the bottom of my heart: Stop your troops from attacking Ukraine. Give peace a chance. Too many people have already died.”

WASHINGTON — U.S. President Joe Biden is condemning Russia for an “unprovoked and unjustified attack” on Ukraine. He promises that the U.S. and its allies “will hold Russia accountable.”Biden says he plans to speak to the American people Thursday after a meeting of the Group of Seven leaders. More sanctions against Russia are expected to be announced Thursday.In a written statement, Biden adds: “President Putin has chosen a premeditated war that will bring a catastrophic loss of life and human suffering. Russia alone is responsible for the death and destruction this attack will bring, and the United States and its Allies and partners will respond in a united and decisive way. The world will hold Russia accountable.”

Airspace over all of Ukraine has been shut down to civilian air traffic, according to a notice posted to air crews early Thursday.

A commercial flight tracking website shows that an Israeli El Al Boeing 787 from Tel Aviv to Toronto turned abruptly out of Ukrainian airspace before detouring over Romania, Hungary, Slovakia and Poland.

The only other aircraft tracked over Ukraine is a U.S. RQ-4B Global Hawk unmanned surveillance plane that began flying westward out of Ukraine after Russia put in place flight restrictions over Ukrainian territory.

The Ukrainian government is closing airports in eastern Ukraine from midnight through 7 a.m. because of the confrontation with Russia.

Ukraine acted after Russia issued a ban on civilian air traffic in airspace over eastern Ukraine.

Last week, Ukrainian aviation officials warned pilots in the region to be on the lookout for Russian authorities trying to take control of the airspace and to only recognize Ukraine’s controllers.

This is a breaking news update. We will update this story as more information becomes available.