Russia's Ministry Of Defense Wants To Buy 5 Dolphins — But Why? 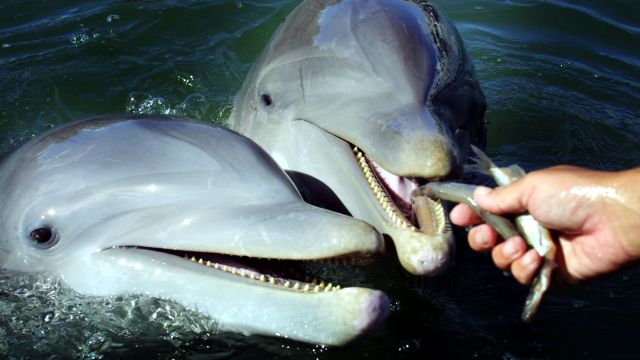 SMS
Russia's Ministry Of Defense Wants To Buy 5 Dolphins — But Why?
By Katie Link
By Katie Link
March 13, 2016
The Russian Ministry of Defense wants the dolphins to "display motor activity." The country hasn't said what it plans to use them for.
SHOW TRANSCRIPT

The Russian Ministry of Defense is in the market for some dolphins. But we don't really know why.

A bid posted on Russia's public procurement website says the government wants five bottlenose dolphins — two females and three males — that are between the ages of 3 and 5 years old.

But no dud dolphins need apply. According to local media, the ministry only wants animals that "display motor activity" and are of an average length.

Russia's willing to fork over about $5,000 per dolphin and wants them by Aug. 1. What's the rush? Again, we don't really know.

But one media outlet reports an anonymous source says the dolphins will be used to beef up the combat dolphin program.

Yes, there is such a thing as a combat dolphin program. NBC reports that back in the 1960s and '70s, the then-Soviet Union trained dolphins to attack divers and plant explosives, but the program eventually shut down.

The U.S. also has a combat dolphin program — though experts say the animals are used mostly to look for mines or sunken objects.